Notes for the Independence Day Speech 2012 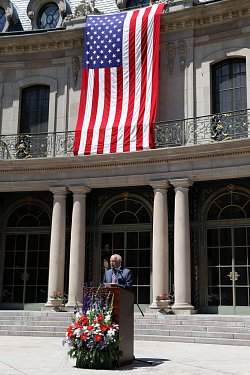 Thank you for inviting me and all of us to celebrate the Independence Day of the United States of America with you and for giving me the opportunity to say a few words on this occasion. This is the last time I am attending this celebration as the President of the Czech Republic and would like, therefore, to speak a little more broadly about the Czech-American relations.

The United States is a country which is firmly connected with our statehood. A century ago, the Czechs living in the United States welcomed the activity of Tomáš Garrigue Masaryk and helped him to gain support for our independence from President Wilson. Several weeks ago, I attended the NATO summit in Chicago. There is no other city which would better illustrate the close historical ties between our two countries. Nowhere else in the world will you find such monumental statues of Karel Havlíček Borovský or of the Blaník Knight, a sculpture honoring President Masaryk.

It was the American army which liberated the Western part of our country and contributed to the defeat of the Nazi regime. It was yet again the strength of the United Statesand its allies which made the collapse of communism in Central and Eastern Europe possible. The American values – the emphasis on individual liberties, civil rights, free market and free enterprise – were an important inspiration for us in the moment of the radical transformation of our country after 1989.

Even now, we see the main security guarantee for our country and for the entire Europe in the alliance with the United States.

In my political career, there has been no other country I have visited as often as the United States. During my two presidential terms, I have visited your country twenty four times. I have met with almost all American presidents who have resided in the White House in the past forty years. Just in my second presidential term, we have twice had the pleasure of welcoming President Obama who chose Pragueas a place of one of his main foreign-policy initiatives. This is also symbolic, in my view.

Today, both the United States and Europe are going through a difficult period. I do not wish to use or misuse these remarks for talking about the public debt crisis or about other economic problems which the Western world has to deal with now. Nevertheless, I am convinced that the American example is relevant for Europe and for us in the Czech Republic. In the American War of Independence, your ancestors fought for freedom and individual liberties. These values are still worth defending, be it against the threats of supranational bureaucratic regulation and postmodern political manipulation in the developed world or against the traditional threats of totalitarianism and dictatorship.

I am pleased and proud that our two countries are friends and allies. Let me congratulate you, Mr. Ambassador, on the 236th anniversary of the Independence of the United States of America.

Václav Klaus, the Residence of the U.S. Ambassador in Prague, 27 June 2012