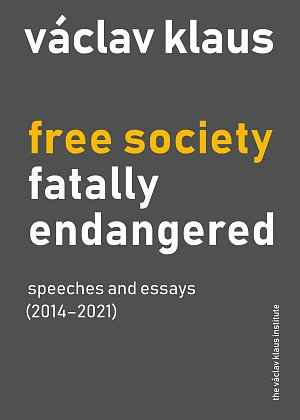 The book “Free Society Fatally Endangered” you are just opening is a collection of texts and speeches delivered by Václav Klaus almost all over the world between 2015–2021. From Washington to Chinese Wuzhan, from St. Petersburg to Tel Aviv, from Moscow, Sochi, Istanbul, Paris, Vienna or Moroccan Dakhla.

Václav Klaus is, without doubt, the most influential political leader in the Czech Republic and a very respected one elsewhere in the world. His sharp, vibrant and well-built opinions stemming from his lifelong systematic studies as well as his remarkable rhetorical abilities to advocate his ideas make him a respectable discussion participant welcome at the most prestigious conferences all over the world.

The centre of Václav Klaus’s intellectual world has always been occupied by the defence of a free citizen as the essence of social and economic freedom. Thus the title of our book – explicitly dedicated to the defence of a free society – has been chosen intentionally provocative. Indeed, Václav Klaus feels and anticipates that our freedoms are fatally endangered as he can see signs where freedom has recently been weakened, attacked and jeopardised. Though we all have been witnessing various symptoms of the gradual restraint of freedom, more or less visible, do we realize it? In this book Václav Klaus offers us answers, he gives us a helping hand to lead us through the complicated and in many respects confused and chaotic current world. In his texts and speeches, he tries to make us more vigilant, he urges us not to surrender fighting for freedom.

The book “Free Society Fatally Endangered” is divided into four chapters. Each one is dedicated to a principal issue that Václav Klaus recognizes as most important and significant - not just from current perspectives but from the point of the future developments in the world around us. Naturally, one may say that some texts can overlap or even spill over into a different chapter but it is inevitable due to complexity of the topics.

Václav Klaus’s determination is based on solid lessons learnt from communism. He belongs to the generation that remembers how easy it was to lose freedom and how difficult it was to get it back. That is why he is so insistent when analysing and describing new, modern, fashionable -isms which he sees as the greatest threats to our freedoms, from multiculturalism, environmentalism, aggressive feminism and genderism to covidism, a brand new ideology, a set of political tools, by means of which the new left activists (no matter whether politically nominally left or right) feel entitled to allow bureaucracy and its state to break into lives of ordinary people, limit our freedoms and impose a mighty and unlimited state power over us. All of these -isms, however trendy and apolitical they may look (allegedly just searching for “rightful and legitimate” corrections of “old inequalities”) are, from Václav Klaus’s point of view, modern, soft but for many people comfortable ways to a new serfdom.

Václav Klaus remembers times when we, the Czechs, were denied to rule our country by ourselves and were controlled by Soviet comrades from a foreign capital. This personal life experience taught him to be an adamant defender of a nation state as the only possible entity able to take care of fully-fledged democracy. His worries about democracy have lead him for decades to criticise sharply the current model of the European unification as well as all negative consequences resulting from it: rule of unelected bureaucracy, out-of-voters’ control decision-making processes made somewhere inside unknown European institutions, the common European currency as the political symbol of the artificial European unification, global-warming fallacies or “green” obsessions at any costs. That is why Václav Klaus’s profound thoughts about today’s Europe in the context of current topics make up a substantial part of this book.

In his numerous speeches all over the world, he paid special and important attention to the phenomenon of mass migration and its consequences on the European (Western) civilisation. The mass migration, so closely tied to the erroneous ideology of multiculturalism, is understood by him as one of direct threats aimed “to destroy European society and create a new Europe which would be much different from the past”, as he noted in his speech delivered at Mont Pelerin Society Regional Meeting in Seoul in 2017. No wonder we dedicated the mass migration phenomenon another chapter in this book.

“Vaclav Klaus, Prime Minister of the Czech Republic, is one of the most remarkable political figures of our time,” wrote Margaret Thatcher about Václav Klaus in 1997, “he is at once a man of ideas and also intensely practical, able both to explain the fundamental requirements of a free polity and economy and to overcome huge problems in order to implement his vision”, she added. These words both highly appreciate Václav Klaus’s crucial and successful political role during the fundamental transformation of the Czech economy and society, and his stubborn insistence on the recreation of the foundations of a free society based on pluralistic democracy and free market. That is why Václav Klaus is an appreciated speaker all over the world, invited to share his precious experience on the large-scale transition from an oppressive regime into a free society. Everywhere he comes, he does not come to mastermind audience and listeners. He humbly respects natural differences, he does not try to impose his opinions. He just recommends ways - purely on his experience. We consider these inspiring texts, included into this book, to be an interesting digest for all those who wish to learn from experience of a successful political leader.

Václav Klaus has not only been part of Czech politics for more than thirty years but a visible and outstanding figure of world politics as well. The figure who raises issues, persuades, provokes and – above all – permanently tries to look behind horizons. The person who is worth being listened to.

I would like to express my strong belief that the book with the provoking title “Free Society Fatally Endangered” will attract its readers, offer them inspiring opportunities to think about the world around us, persuade them that a free society must be defended not sometime tomorrow – but today. This is the fundamental message of this book.