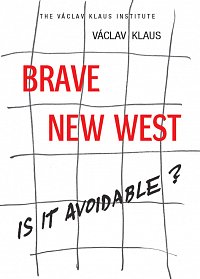 This small book is a collection of articles and speeches written, published or delivered in the last year and a half, at a time when the Covid restrictions started to be less destructive and oppressive and an almost normal life became possible. They were presented in eight European countries (if we include Turkey and Azerbaijan into Europe) and published and republished in several others.

This book no longer focuses on Covid and covidism. It optimistically assumes that the irrational and unjustifiable obsession of people (and especially of progressive and politically correct people) with this unusual respiratory disease which was characteristic for years 2020 and 2021 is over now. The deep trace it has left, however, remains with us. The combination of freedom and government masterminding of our way of life which we experienced in the past decades has been lost, I am afraid, forever. Its new, less friendly version is here and is here to stay.

The title of the book is, hopefully, understandable. I considered several variants, some of which,e.g. “The West at the Crossroads” or “The Fate of the West at Stake”, seemed quite interesting at first. But it came to me that they don’t adequately express today’s world. They would be meaningful yesterday. I fear that the West is, unfortunately, no longer at the crossroads. Similarly, the fate of the West doesn’t seem to be at stake when looking at the reality around us. Both were true yesterday. That is why I decided to paraphrase the title of the book, of which I have been a big fan already for a long time.

The title “Brave New West” should remind us of the phenomenal book by Aldous Huxley, who – more than 90 years ago – coined the term “Brave New World”. His dystopic book – together with George Orwell’s opus magnum – was obligatory reading for many of us who lived through a similarly brave communist world.

Both Huxley and Orwell (unfortunately unlike most of their readers) knew that they were writing about the West. The readers saw in it the East – some of them, undoubtedly, with an unspecified fear that such a system could be eventually transferred to the West.

Not many people saw at that time that its seeds had already been planted, watered and fertilized in the West itself. It is even worse. What we are experiencing in the West now is not an import from the East, even though some people see Putin, Russia and China in everything. Even in bad weather or lack of snow during 2022 Christmas.

The conviction that we are coming close to the brave new West is the substance of my interpretation of what is going on in Europe and North America these days. I don’t underestimate other dangers but this is the one that makes me most anxious, nervous and pessimistic.

The subtitle of my book asks: “Is It Avoidable?” I am not a fatalist. It, therefore, definitely is avoidable but I don’t give it much of a chance, at least in a foreseeable future. To get rid of the current prevailing trends and tendencies would require a sort of “Velvet Revolution” in both our heads and hearts. And not only in the Czech Republic.

It would ask for a radical change of our thinking and political behaviour. We would have to return to freedom, to free markets, to democracy (from post-democracy), to the ideas of classical liberalism, to Mises, Hayek and Friedman, to the way of thinking which prevailed in the newly free countries of Central and Eastern Europe after the fall of communism. It would ask for the rejection of both red and green socialisms, for the rebuilding of a new balance between a free individual and the omnipresent and ever-expanding state, for the termination of the extensive state control of the economy, for the return to standard politics and ideological disputes (instead of empty and superficial TV talk-shows).

Ideas of that kind are presented and developed on the following pages. Let me put forward those, which I consider the most relevant now.

The first texts return to Covid. At the very beginning of the epidemic, I argued that “the epidemic opened the door to a huge expansion of government intervention into our lives” because its actual danger was overestimated and misused. The people all over the world believed in the prefabricated, absolutely false Covid narrative. I have also been continuously paying attention to the three endangered building blocks of the European civilization – the man, the family and the nation. We can’t afford to lose them. And I repeatedly called the Klaus Schwab’s Great Reset “the reincarnation of communism under a new banner”.

On several opportunities I spoke about a civilizational crisis of the West. When looking at Greta Thunberg, Klaus Schwab, Franz Timmermans, Madame Lagarde and many others, I feel obliged to keep reminding us that we should fight their arrogant behaviour and shouldn’t capitulate to them.

In the middle of March 2022, commenting on the Ukraine war, I wrote: “the war has been going on for three weeks now and it will not come to a quick end by itself.” It proved to be true. In December, as I am writing this preface, the war has been going on for ten months already. The war hasn’t stopped by itself. The politicians and the media usually stress tangible events – the huge amount of victims and of material and financial costs – but I felt already at the end of March that because of this strange war we were losing to progressivism, multiculturalism and globalism. I proclaimed that it would result in a significant shift in the global cultural and civilizational conflicts. The war has given “wings” to all kinds of progressivists and multiculturalists.

The ideas have a critical role. In May 2022, I argued in Budapest that “we have been on the defensive for a long time” and that “we must actively start defending and promoting ideas we inherited from our predecessors”.
In June, in Baku, I repeated that “we did not protest loudly enough when a post-modern, extensively centrally administered economy began to be reintroduced”. Its return was prepared “by radical environmentalism, transnationalism, aggressive genderism, human-rightism and similar stances” (Karpacz, Poland, September 2022).

In November, in Geneva, I added: “We all know that the war didn’t fall from the sky. It has been long time in the making. The problems there did not start in February 2022. Already in 2014, I warned against the destabilization of Ukraine and against the growing confrontation between the West and Russia. To my great regret the then confrontation has turned into a full-scale war with thousands of victims, with huge destruction of vast regions of Ukraine and with fundamental changes in the international atmosphere. To blame the aggressor is easy, to be able to see and understand the whole sequencing of events which led to it is more difficult.”

Repeatedly, I criticised environmentalism and the Green Deal. In Budapest in December, I said the following: “In the last fifty years, since the publication of the Club of Rome’s bible “The Limits to Growth”, a new political, which means non-economic imperative has emerged. It was based on the tenets of green ideology, of environmentalism. It fatally suppresses economic rationality and, as a consequence, the efficiency of the economy. It fundamentally alters the quality of the economic system and undermines economic growth and development. No one of today’s politically correct green slogans can be defended on rationality grounds. They have no basis in science. They are political and aprioristic. And purposefully destructive.”

I will stop here but I want to repeat my conviction that we should stop being silent. We need to discuss all these issues openly. And not only discuss. We should bring them to politics.

This book of mine raises elementary questions, opens relevant topics and offers strong stances on some of them. I hope it will find its readers.

The book can be bought here.