Hlavní strana » English Pages » Interview of the President of… 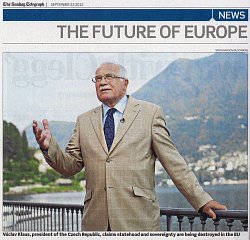 The new push for a European Union federation, complete with its own head of state and army, is the "final phase" of the destruction of democracy and the nation state, the president of the Czech Republic has warned.

In an interview with The Sunday Telegraph, Václav Klaus warns that "two-faced" politicians, including the Conservatives, have opened the door to an EU superstate by giving up on democracy, in a flight from accountability and responsibility to their voters.

"We need to think about how to restore our statehood and our sovereignty. That is impossible in a federation. The EU should move in an opposite direction," he said.

Last week, Germany, France and nine other of Europe's largest countries called for an end to national vetoes over defence policy as Guido Westerwelle, the German foreign minister, urged the creation of a directly elected EU president "who personally appoints the members of his European government".

Mr Westerwelle, in a reference to British opposition, called for nation states to be stripped of vetoes on defence to "prevent one single member state from being able to obstruct initiatives" which "could eventually involve a European army".

The new offensive followed the unprecedented declaration by the Commission's president, José Manuel Barroso, during his "state of union" address to the European Parliament on 12 September, that he would make proposals for a fully-fledged EU "federation" in 2014. "Let's not be afraid of the word," he said.

Speaking in Hradcany Castle, a complex of majestic buildings that soars above Prague, and is a symbol of Czech national identity, Mr Klaus described Mr Barroso's call for a federation, quickly followed by the German-led intervention, as an important turning point.

"This is the first time he has acknowledged the real ambitions of today's protagonists of a further deepening of European integration. Until today, people, like Mr Barroso, held these ambitions in secret from the European public," he said. "I'm afraid that Barroso has the feeling that the time is right to announce such an absolutely wrong development.

"They think they are finalising the concept of Europe, but in my understanding they are destroying it."

President Klaus, 71, is one of Europe's most experienced conservative politicians; he has served as his country's prime minister twice after winning national elections and will complete his second term as Czech President next year.

Frequently referred to as the "Margaret Thatcher of Central Europe", Mr Klaus was born in Nazi-occupied Prague, played a key role in the 1989 Velvet Revolution that overthrew Communism and became founder of the Czech Civic Democratic Party, which has remained in government for most of the Czech Republic's independence.

He reluctantly recommended Czech Republic membership of the EU in 2004 and five years later was the last European head of state to sign the Lisbon Treaty, delaying signature, under intense international pressure, until all legal and constitutional appeals had been exhausted against it in his country. "We were entering the EU, not a federation in which we would become a meaningless province," he said.

Mr Klaus is a courteous old-school European, a keen and frequent public speaker, who insists on an intellectual critique of ideas rather than the personal criticism that often substitutes for serious political debate today. To his "great regret" he finds himself a lone fighter for democracy among Europe's heads of state.

"When it comes to the political elites at the top of the countries, it is true, I am isolated," he said. "Especially after our Communist experience, we know, very strongly and possibly more than people in Western Europe, that the process of democracy is more important than the outcome.

"It is an irony of history, I would never have assumed in 1989, that I would be doing this now: that it would be my role to preach the value of democracy."

In his book, Europe: The Shattering of Illusions, to be published by Bloomsbury on Thursday, Mr Klaus makes the case that the EU has evolved into its current form because political leaders have found it convenient to turn away from their nation states, where voters have historically been able to hold them to account.

"Political elites have always known that the shift in decision-making from the national to the supranational level weakens the traditional democratic mechanisms (that are inseparable from the existence of the nation state), and this increases their power in a radical way. That is why they wanted this shift so badly in the past, and that is why they want it today," he writes.

"The authors of the concept of European integration managed to short circuit the minds of the people, making a link between Hitler's aggressive nationalism (nationalism of a totally negative type) and the traditional nation state, calling into question the existence of nation states in general. Of the many fatal mistakes and lies that have always underpinned the evolution of the EU, this is one of the worst."

Mr Klaus is genuinely baffled and aghast when describing his state visit to Italy last week, where he encountered what he called the "destructive mentality" of Italian politicians who were using the eurozone crisis to give up on democracy and to evade responsibility for running their country.

"It was really very depressing for me how many leading Italian politicians expressed the view that it is necessary to shift competences from Italy to Brussels because of one thing: they passively accept they are not able to make rational decisions themselves," he said. "They can now find the excuse or alibi that 'we are forced to do it'. I have never heard it before so explicitly or directly.

"It is a flight from accountability and responsibility. They have given up on the role and importance of democracy. That is the final and really tragic consequence."

With sadness, more than anger, he concludes that the Conservatives, in government under David Cameron, are no better than any other national politicians with "two faces", who "show one to their voters and the other when speaking in Brussels, at various EU summits and similar events."

"We see it best with the British Conservatives after Margaret Thatcher. With the full weight of public opinion behind them, sharply opposing the euro and any further transfer of powers to Brussels - winning many a vote thanks to this - as soon as they step on to the continent, their resolve to fight for these principles evaporates," he writes.

Speaking to The Sunday Telegraph, he is too courteous as Czech head of state to criticise directly the Prime Minister's leadership, but is privately said to be despairing at his lack of fight at the EU summit table. "I would wish to return to the original position with the Conservative Party. I don't really wish to add to what I say in my book," he said.

After the collapse of Communism, conservatives in the Czech Republic found natural allies in their Britain counterparts under Baroness Thatcher - a relationship that has continued, with members of Mr Klaus's party sitting in the grouping led by British Conservatives in the European Parliament.

But Mr Klaus himself is beginning to think beyond that. As Czech president he cannot act unilaterally, but he expresses his personal support for the UK Independence Party, a relationship that became closer after a recent meeting with its leader Nigel Farage, and he hinted at possible plans when his second and last term of office ends next March.

"Involvement in an explicit way is at the moment out of the question. I suppose in the long run, but definitely not as president of this country," he said, adding: "I support many of their ideas."