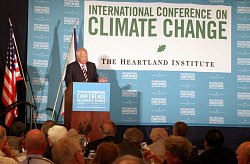 Some of you know that I came to Chicago for the NATO summit. Yesterday and today I was supposed to speak about what to do in Afghanistan, how to keep NATO going in an era of overall indebtedness and budgetary cuts, and about NATO-Russia relations. I am glad to tell you that we did not discuss the global warming. It seems that NATO does not consider global warming to be a security threat. But my main preoccupation in the last days was NATO and I am afraid I am not sufficiently prepared to make a serious contribution to your conference. Let me make at least a few remarks I consider relevant now.

The word “now” is important. On Friday evening I attended a music festival in Prague and during the break I mentioned to a group of people that I go to Chicago, among other things to speak at this conference. Their reaction was: “Global warming? Isn’t it already over? Does anybody care about it?”. That is how they see it. Maybe, it is a European perspective.

Let me, therefore, start by thanking you for keeping the global warming issue alive. This is an important achievement in a moment when it has already become half-forgotten. It has not happened accidently, it was and is planned. It is a part of a carefully prepared tactic of global warming alarmists how to – once and for all – win their case. In the past two decades, they tried to do the opposite. They wanted to be as loud as possible to arouse our fears, now – when the whole issue becomes more and more suspicious – it is in their interest to stop any public discussion. This is the reason why they try to pretend that “the science is settled”, that the debate is over. We should not let them do it.

Some of you may have a different experience. You may feel to be permanently under a very aggressive attack, but we have to admit that something has changed. Last time I was asked to speak about global warming was in July2011 inAustralia. Of course, one possible explanation is that the audiences are no longer interested in my views on this topic (which is something I am ready to accept); the other explanation is that this experience of mine is not unique. The topics have undoubtedly changed. I am more often asked to speak about the Eurozone sovereign debt crisis than our global warming. It may also be the symptom of the victory of global warming fundamentalists who try to make the global warming debate forgotten. That gives this conference a special importance.

The undeniable fact is that almost from one day to the next the global warming debate ceased to be fashionable. It disappeared from the headlines. It may weaken the position of the global warming fundamentalists but it makes it more difficult for us, the “deniers” or “skeptics”, as they call us, to motivate people to think about this issue and to openly and politically express their views about the irrational, human freedom curtailing, human prosperity undermining measures and policies introduced by the political establishments in most of the countries of the world in the last two decades, not to speak about the measures prepared for the future. We have to keep repeating that our planet is determined not only by anthropogenic influences but dominantly by long term exogenous and endogenous natural processes and that most of them are beyond any human control.

The alarmism has subsided, they want to make it “low profile”. Declarations such as the one in Dr. Pachauri´s manifesto from 1989 that “global warming is the greatest crisis ever faced collectively by humankind” are no longer popular. The former radical alarmists, even the scientists connected with the IPCC, changed their tactic. More and more often we hear carefully worded statements that “some environmentalists, supported by the media, exaggerated the conclusions that had been carefully formulated by scientists”. We know that they were not “carefully formulated”. These “conclusions” were very easy to reformulate.

Again, I see this development as a mixed blessing. The earlier apocalyptic warnings succeeded in creating the overall belief in the undeniable existence of a dangerous, man-made global warming. This belief has become deeply rooted in the heads (and hearts) of people all over the world. I agree with Professor Plimer when he sees the main danger in the fact that the children have already been indoctrinated. For that reason we have to keep the global warming debate alive.

How to make a change? I dare say that science per se will not make it regardless of its achievements. Serious scientific research continues bringing new and new pieces of knowledge almost on a daily basis but it has not brought and will not bring any decisive breakthrough in a public debate on this topic in any direction. That is not the role of science or of one scientific discipline. Climate is a complex system which means that – in spite of the dreams of believers in general systems theory – any scientific discovery concerning this topic will always be only a partial one. The course of the world-wide global warming debate more or less confirms this elementary methodological argument.

Can a decisive change come as a result of new empirical data? I doubt it as well. It is evident that the current temperature data confirm neither the GWD alarmist and apocalyptic views, nor their quasi-scientific hypotheses about the exclusivity of relationship between CO2 and temperature. The world has not warmed up very much since the end of the last century but a period of twelve years is too short to shatter the whole carefully built edifice of the GWD. We shouldn´t forget that we have been arguing in the past that a century in climatology is too short to prove the global warming as a long term trend. That is why, to my great regret, we have to – symmetrically – accept that a decade is not sufficient to do the opposite.

There is no doubt that most of the true-believers in the GWD remain undisturbed in their views. Some individuals leave the bandwagon (the most recent well-known case is James Lovelock) but those people who have vested interests (and there are many of them now) together with the men and women who innocently and naively sympathize with any idea which is against freedom, capitalism and markets are still “marching on”.

Discussing technicalities is not sufficient, because the supporters of the GWD are not interested in them. We are not dealing with people who are authentically interested in science and in incremental changes in temperature and their causes. For them, the temperature data are just an instrument in their plans to change the world, to suppress human freedom, to bring people back to underdevelopment. Their ideas are the ideas of ideologues, not of scientists or climatologists. Data and sophisticated theories will never change their views.

We have to accept that they have succeeded in establishing the religion of environmentalism as the official religion of Western society, as the religion which asks for a radical transformation of the whole Western civilization. We – at least some of us – have to play with them in the arena chosen by them.

There are probably more and more people around us now who do not buy the alarmism of the GWD but we have to accept that they are not sufficiently motivated to do anything against it. And they don’t know how. Politicians and political activists, bureaucrats in the national and international organizations, and representatives of the subsidized businesses are organized and due to it are able to push this doctrine further ahead because to do so is in their narrowly defined interests. Ordinary people are not organized and do not have politically formulated interests. They are also not helped by the existing political parties because these parties are not raising this issue either. They are already – almost all of them – more or less captured by the Greens.

To sum up my today’s simple message: empirical data are important; scientific discoveries are important; the disclosure of malpractices in the IPCC and other “bastions” of the GWD are important; but we have to take part in the undergoing ideological battle. The subtitle of my five years old book was “What is Endangered: Climate or Freedom?” There is no doubt that it is all about freedom. We should keep that in mind.