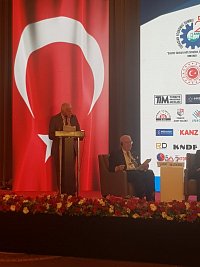 The times they are a changin’, as Bob Dylan sang almost sixty years ago. I was here last time in April 2015, seven years ago. The world was different then in many aspects:

Seven years ago, when I spoke here last time, I said that “we are facing the destabilization of Ukraine”. I felt already at that time that “we are endangered by the Ukraine crisis”. I was convinced that “the crisis was home-made and was caused by the failure of Ukraine to successfully realize the necessary post-communist political, economic and social transformation”. I said also that “the Ukraine domestic problems were misused for starting a new wave of confrontation between the West and Russia.” This was in April 2015. We should not pretend that the problem there started in February 2022. As these quotes of mine prove, some of us saw the situation there as extremely risky and hazardous long time ago.

It was adequate to use the term “confrontation” in April 2015. It is, regretfully, necessary to say “war” now. It is a tragic and destructive war. It kills tens of thousands of people. It brings huge material and financial costs. It liquidates the post-WW2 global arrangements. It changes the atmosphere in the whole world. Today’s aggressor is Russia, there are no doubts about it.

However, that is not all. The very fertile ground for a tragic clash has been under construction for a long time and the rest of the world has been involved in it in many respects. It is too early, especially in our part of the world, to discuss it strictly analytically, without emotions and aprioristic presumptions.

The solution will not come from the two fighting countries only. It is the task of the international community to help to stop the war, to take an active part in the preparation of very difficult negotiations, to help to draft at least the outlines of a feasible solution. Such a solution can’t be based on prolonging the war into infinity or till the total destruction of either Russia or Ukraine.

I have neither the ambition nor the political position to suggest the framework of negotiations and basic aspects of an agreement that could bring a solution, but I am convinced that the serious and meaningful negotiations have to start now. It was too late yesterday. To find a solution to this tragic and horrifying war is a precondition for solving other important global, as well as regional issues discussed at this year’s Marmara Forum.

We, in the Czech Republic and in the whole of Central Europe, are confronted with galloping inflation (luckily not as high as in Turkey), with huge budget deficits and growing indebtedness, with collapsing energy deliveries, with declining living standards and with a grim prospect of an upcoming recession. Our governments are strong enough neither politically, nor in their ability to act decisively, consistently and systematically. To our great regret, we can’t expect from them quick and adequate political responses. Saying that is not an empty pessimism on my side. It is a sad conclusion of an old, not necessarily “sagacious”, but still analytically minded man.

Many thanks for giving me the floor for sharing some of my thoughts with such a distinguished audience.