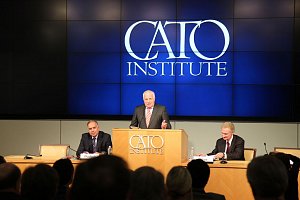 Many thanks for organizing this gathering. I am glad to be again here, in Cato, where I have many friends. I highly appreciate the role Cato Institute has played in the last decades in defending freedom, free markets, and limited government.

This is a special moment for me. On Thursday, my second term as President of the Czech Republic expired and on Friday, the new President was inaugurated. He was my long-term political rival, standing on the other side of the political and ideological barricade. I can assure you, however, he will not weaken the existing Czech-American friendship and partnership.

It is for me, with a high degree of probability, the end of more than 23-years-long career in the Czechoslovak and later Czech top political positions, a career lasting from the fall of communism and the Velvet Revolution until last week. So I start my new life here with you today. I was extremely honored to be invited to become a distinguished senior fellow at Cato and am eager to fulfill this role. This lecture is just the beginning.

I was asked to say a few words about Europe. Let me put this into a broader perspective. More than a year ago, my book about Europewith the title “European Integration Without Illusions” was published and later translated into English, German, Italian, Spanish, Bulgarian and Danish. The British publisher called it “Europe: The Shattering of Illusions”, the German “Europa braucht Freiheit” (Europe needs Freedom).

The book reflects my frustration with the developments in Europe. It discusses the European institutional developments from the Second World War till the outbreak of the Eurozone debt crisis, as well as the very problematic current reactions to it and their enormous costs. It also argues against the naive and excessively optimistic expectations of the economic benefits of territorial integration (and centralization) which have been considered as the main argument in favor of the integration process and discusses the undemocratic consequences of denationalization and communitarization of Europe.

All the available evidence suggests that the economic future will not be easy for those of us living in Europe together with our families, children and grandchildren, and have, therefore, a genuine, not only academic interest in the European future.

The Czech Republic is a part of Europe, a member of the European Union, and a non-member of the Eurozone. I deliberately differentiate these three entities. They are different. Almost 85 % of our exports go to Europe, to a region which undergoes both a protracted economic stagnation and an acute sovereign debt crisis. Even with our own freely floating Czech crown we cannot disconnect ourselves from the economic trends in the rest of Europe. To be able to grow, the Czech Republic – as a textbook case of a small open economy – needs a healthy economic growth of its main trading partners. This is, regretfully, not the case.

The present economic situation in Europeis not accidental. It is a consequence of the deliberately chosen and gradually impaired European economic and social system and of the more and more centralistic and bureaucratically intrusive European Union institutional arrangements. They both form a fundamental obstacle to any further positive development, an obstacle which cannot be removed by marginal corrections or by eventually more rational short term economic policies. The problems are deeper.

As I said, I see the important part of the problem in the European economic and social system itself. It is more than evident that the overregulated economy, additionally constrained by a heavy load of social and environmental requirements, operating in a paternalistic welfare state atmosphere, cannot grow. This burden is too heavy and the incentives to a productive work are too weak. If Europe wants to restart its economic development, it has to undertake a fundamental transformation, a systemic change, something we had to do 20 years ago in our part of Europe.

The other part of the problem is the European integration model. The excessive and unnatural centralization, harmonization, standardization and unification of the European continent based on the concept of “an ever-closer Union” is another obstacle.

These complex issues deserve to be discussed from many perspectives, but it is evident that they found their “climax” in the attempt to monetarily unify the whole continent. This was the moment when the marginal costs of the European integration project started to visibly exceed its benefits. This evident failure, and it is appropriate to call it a failure, was inevitable, was expected, and was well understood by many of us in advance. Its consequences – especially for economically weaker European countries which were used to undergo unpleasant, but much needed and unavoidable adjustment-bringing devaluations of their currencies repeatedly in the past – were well-known in advance as well. All economists who deserve to be called economists were aware of the fact that Greece and some other countries were doomed to fail having been imprisoned in such a system. History gives us similar examples. The case of Argentina is, I hope, not forgotten. (Currency board is a weaker and more easily dissolvable form of monetary union.)

The benefits – promised as a result of accepting a common currency – never arrived. The assumed increase in international trade and in financial transactions was relatively small and was more than offset by the costs of this arrangement.

In good weather (in economic sense), even the non-optimal currency areas can function, as all kinds of fixed exchange rate regimes did for some time. When bad weather comes – as the financial and economic crisis at the end of the last decade – all the inconsistencies, weaknesses, inefficiencies, discrepancies, imbalances and disequilibria become evident and the monetary union ceases to properly function. This can’t be considered a surprise. In the past, all fixed exchange rate regimes (like the Bretton Woods system) needed exchange rates realignments sooner or later, which is another argument found in every elementary economic textbook.

The expectations, better to say wishes or dreams, that a very heterogeneous European economy would be made homogenous by means of monetary unification were proved to be wrong. The European economies have diverged, not converged since the introduction of the euro. The elimination of one of the most important economic variables – of the exchange rate – from the existing economic system led to a certain blindness of politicians, economists, bankers and other economic agents.

At the beginning of February, we, in the Czech Republic, remembered the 20th anniversary of the monetary disintegration with Slovakia. We were together for 70 years but had to accept that the institutional integration was not sufficient for the elimination of economic difference of both countries. There were, of course, other reasons for the split of the former Czechoslovak federation, but the economic ones were very important. As the last federal minister of finance, I know something about it.

Some people do not want to look at it seriously. At the recent EU-Asia summit in Laos, in November 2012, I found it almost fascinating when the Spanish minister of foreign affairs stated there as regards the euro: “we were not warned in advance about the possible consequences of the European common currency”! Everyone was warned, some people just did not listen.

Let’s not be misled. When discussing the current European problems, it is wrong to concentrate on the achievements or failures of individual countries, e.g. on Greece or any other country in the European South. Greece did not bring about the current European problem, Greece is the victim of the Eurozone system of one currency. The system is a problem.Greece made just one tragic error – to enter the Eurozone. Everything else was its usual behavior, which I – and we all – don’t have a right to criticize.

Greece’s degree of economic efficiency or inefficiency and its propensity to live with a sovereign debt was or should have been well-known to anyone. Letting Greeceleave the Eurozone – in an organized way – would be the beginning of a long journey of this country to a healthy economic future. I have no ambitions to change Greece, I want to change the EU institutional arrangements. The Greeks hopefully already understood that “one size does not fit all” and I only wish the same would be understood by leading EU politicians. I don’t see it, however.

Their way of thinking is based on an almost communist type of reasoning: economic laws do not exist, politics may dictate economics. People like me were raised in an era when such a mode of thinking was dominant in communist countries of Central and Eastern Europe. Some of us dared to express our disagreement with it already in the past. We were considered enemies then, we are considered enemies now again.

Europe is ripe for a fundamental decision: Should we continue believing in the dogma that politics can dictate economics and continue defending the common currency and other similar arrangements at whatever costs, or should we finally accept that we have to return to economic rationality?

The answer to such a question given by the overwhelming majority of European politicians until now has been YES, we should continue. It is our task to tell them that the consequences of such a policy will be higher and higher costs for all of us. At one moment, these costs will become intolerable and unbearable. They should say NO. I am afraid that the U.S. Administration does not send them such a clear message.

What we need in Europe are not more frequent summits in Brussels, but a fundamental transformation of our thinking and of our behavior. Europe has to undertake a systemic change. Coming to such a decision needs a genuine political process, not the approval of a sophisticated document prepared behind closed doors. The solution must arise as an outcome of political debates in individual EU member countries. It must be generated by the people, by the “demos” of these countries.

It is fashionable to speak about a crisis. But crisis is – in Schumpeter’s definition (and Schumpeter belongs partly to my country, not just to Austria and America, because he was born in Southern Moravia) – a process of creative destruction. Not everything can be saved and maintained. Something must be destroyed or left behind in this process, especially the wrong ideas. We should get rid of utopian dreams, of irrational economic activities and of their promotion by European governments. Part of this implies that even some states must be left to fall. The opponents of such positions keep saying that such a solution would be costly. I see it differently. The prolongation of the current muddling through is more costly. The costs the Europeans are afraid of are already here. They are sometimes called sunk costs.