Europe: The Shattering of Illusions 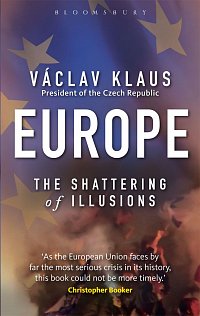 I know the book is more relevant for European readers but I have a special reason to promote it here as well. The book was written last autumn, immediately after my return from the United States where I had several discussions about European problems, one of them also at the Hudson Institute. These presentations here in America – together with the visible reluctance of Europeans to look at themselves seriously and without prejudice or wishful thinking – motivated me to formulate my position in a more complex way. I decided to write a book about it.

Being in U.N. Headquarters is always a problem for me. They are systematically – ignoring the need for the much heralded energy and CO2 savings – overairconditioning the rooms there and I always become ill. The same happened last September and after returning to Prague I was forced to unwillingly stay in bed with antibiotics for 10 days. After the first two restless hours in bed I started to write the book and you have in your hands the outcome of these ten days. The book was originally published in Prague last December, in Bulgaria in February, in Italyl ast week. The German and Spanish editions will be completed in a couple of weeks.

The book reflects my frustration with the current situation in Europe. It discusses the European institutional developments since the Second World War till the beginning of the Eurozone debt crisis and criticizes the current unstable and non-functioning phase, which I call “interim phase”. I consider as the most important the chapters devoted to the polemics with the excessively optimistic expectations of the economic benefits of territorial integration (and centralization) as well as to the discussion of the undemocratic consequences of denationalization and communitarization of Europe. The undergoing process of Europeazation is one variant of the ideology and practice of global governance. In this respect I quote very extensively one of the collaborators of Hudson Institute, John Fonte.

All the available evidence – both the economic data and the responses implemented up to now – suggest that the economic future will not be easy for those of us who live in Europe. We live in Europe, together with our families, children and grandchildren, and have, therefore, genuine, not only academic interest in our positive future.

After the Second World War, Europe– without its Eastern part which suffered under communism – had a promising start. The post-war reconstruction was an undeniable success. People were motivated to overcome the tragic experiences of the 1930s and 1940s. Even the political leaders understood that

- Europe needed peace and friendly cooperation among countries and that

- after its protectionist, inward-looking prewar era, Europe needed economic integration, which asked for opening up, for the liberalization of inter-country economic relations, for the removal of all-kinds of barriers existing at the borders of individual countries, for the facilitation of the flows of not only goods and services, but also of people and capital as well as ideas and cultural patterns among countries.

The liberalization of inter-country relations increased competition by enlarging the size of the more or less open (or semi-open) common economic space and this helped to make the post-war reconstruction possible. This one-sided liberalization had, nevertheless, one obvious weakness. The relatively successfully organized inter-country liberalization was not based on a similar liberalization of markets inside individual European countries. On the contrary.Western Europe eagerly and voluntarily accepted “die soziale Marktwirtschaft”, this unproductive, excessively paternalistic, overregulated socio-economic system which became further decimated in the following decades by the arrival of the market-hostile green ideology, of environmentalism.

With these very dubious foundations, Jacques Delors and his collaborators began – a quarter of century ago – to unify Europe, to build a new construct which found its institutional incarnation in the European Union. Integration turned into unification, liberalization into centralization, harmonization and standardization, pro-competitive policy into excessive regulation, healthy diversity into rigid uniformity. This did not bring any positive results, just the opposite.

The most ostentative step in this direction was the establishment of the European Monetary Union, the introduction of single currency in a grouping of very heterogeneous countries which do not form an optimum currency area (as defined by Robert Mundell and all mainstream economic textbooks). Its failure was inevitable. Its consequences for economically weaker countries which were used to undergo unpleasant, but adjustment-bringing devaluations of their currencies repeatedly in the past, were well-known in advance as well. All economists who deserve to be called economists had known that Greece and some other countries were doomed to fail having been imprisoned in such a system.

In good weather (in economic sense), even the non-optimal currency area could function (as all kinds of fixed exchange rate regimes did for some time). When bad weather came – e.g. the financial and economic crisis at the end of the last decade – all the weaknesses, inefficiencies, discrepancies, imbalances and disequilibria became evident and the monetary union ceased to properly function. This can´t be considered a surprise. In the past all fixed exchange rate regimes needed exchange rates realignments in due time which is another argument found in every elementary textbook.

The European Union decision-makers did not want to take this into consideration. Their way of thinking was evidently based on an almost communist type of reasoning: economic laws do not exist, politics may dictate economics. Some of us have been very sensitive to this for a very long time. People like me were raised in an era when such a mode of thinking was dominant in our countries of Central and Eastern Europe. Some of us dared to express our disagreement with it already in the past. We were considered enemies then, we are considered enemies now.

There is time for a fundamental decision: should we continue believing in the dogma that politics can dictate economics and continue defending the common currency at whatever costs or should we finally accept that we have to return to economic rationality?

The answer to such a question given by the overwhelming majority of European politicians has been until now YES, we should continue. Our task is to tell them that the consequences of such a policy will be higher and higher costs for all of us. At one moment, these costs will become intolerable and unbearable. We should say NO. We find ourselves in a blind alley and in such a case the only possible way out is the way back.

What we need is a fundamental transformation of our thinking and of our behaviour. Europe has to undertake a systemic change, something we did 20 years ago in our part of Europe. Coming to such a decision needs a genuine political process, not the approval of a document prepared behind closed doors by a group of EU bureaucrats. It must arise as an outcome of political debates in individual EU member countries. It must be generated by the people, the “demos” of these countries. There is no demos in Europe, there are just “inhabitants” of Europe.

The Eurozone sovereign debt crisis is the tip of a much bigger iceberg. It goes much deeper. Crisis is – in Schumpeter’s definition – a process of creative destruction. Not everything can be saved and maintained. Something must be destroyed or left behind in this process, especially the wrong ideas. We should get rid of utopian dreams, of irrational economic activities and of their promotion by European governments. Part of this implies that even some states must be left to fall. The opponents of such positions keep saying that such a solution would be costly. It is not true. The prolongation of the current muddling through is more costly. We have to explain to them that the costs they are afraid of the so-called sunk costs, are already here!