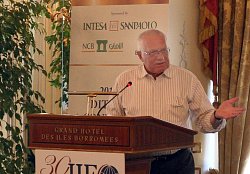 Many thanks for the invitation to this very serious gathering. I just returned from a week long state visit to Malaysia and Indonesia, from two fast growing countries. This trip reinforced my feeling that there is no other topic worth discussing at meetings like this one than Europe and its economic fate. Let me, therefore, use this opportunity to say a few words about how I see it.

All the available evidence – both the economic data and the up to now implemented policy responses – suggests that the economic future will not be easy for those of us who live in Europe. We do not have the luxury of being just uninvolved visitors or observers from other continents. We live here, together with our families, children and grandchildren, and have, therefore, genuine, not only academic interest in the positive European development in the future. Some of us know that in the short and medium term we must be prepared for very unpleasant economic, budgetary and banking problems. Looking further ahead we are afraid we are moving to an era of prolonged stagnation which will result in the loss of our relative economic position vis-à-vis the rest of the world, especially vis-à-vis the BRIC countries. My travels all over the world tell me that the acronym BRIC is too short, there are many more letters which deserve to be included into it.

What happened? What went wrong? After the Second World War, Europe – without its Eastern part which suffered under communism – had a promising start. The post-war reconstruction was an undeniable success. People were motivated to overcome the tragic experiences of the 1930s and 1940s. Even the political leaders understood that

- Europe needed peace and friendly cooperation among countries and that

- after its protectionist, inward-looking era, Europe needed economic integration which asked for opening up, for the liberalization of inter-country economic relations, for the removal of all-kinds of barriers existing at the borders of individual countries, for the facilitation of the flows of not only goods and services, but also of people and capital as well as ideas and cultural patterns among countries.

Europe also felt endangered by the imperialistic and expansionist Soviet Unionon its eastern borders.  This threat – to some extent – blocked or at least dampened the anticapitalist and democracy-undermining tendencies which were deeply rooted in the fabric of European society before and after the Second World War and which so strongly reappeared after the end of the Cold War.

The original objectives of the European integration process in the 1950s were basically correct. The liberalization of inter-country relations increased competition by enlarging the size of the more or less open (or semi-open) common economic space and this helped to make the post-war reconstruction possible. This one-sided liberalization had, nevertheless, one obvious weakness. The relatively successfully organized inter-country liberalization was not based on a similar liberalization of markets inside individual countries. On the contrary.Western Europe eagerly and voluntarily accepted “die soziale Marktwirtschaft”, this unproductive, excessively paternalistic, overregulated socio-economic system which became in the following decades further decimated by the arrival of the market-hostile green ideology, of environmentalism.

With these very dubious foundations, Jacques Delors and his collaborators began – a quarter of century ago – to unify Europe, to build a new construct which found its institutional incarnation in the European Union. Integration turned into unification, liberalization into centralization, harmonization and standardization, pro-competitive policy into excessive regulation, healthy diversity into rigid uniformity. This did not bring any positive results, just the opposite.

The most ostentative step in this direction was the establishment of the European Monetary Union, the introduction of single currency in a grouping of very heterogeneous countries which do not form an optimum currency area (as defined by Robert Mundell and all mainstream economic textbooks). Its failure was inevitable. Its consequences for economically weaker countries which were used to undergo unpleasant, but adjustment-bringing devaluations of their currencies repeatedly in the past were well-known in advance as well. All economists who deserve to be called economists had known that Greece and some other countries were doomed to fail having been imprisoned in such a system.

It would be possible to quote many economists who explicitly expressed such a view. I agree with Prof. Robert Barro who in his recent Wall Street Journal article (An Exit Strategy From the Euro, January 9, 2012) argued that the benefits – promised as a result of accepting a common currency – never arrived. The assumed increase in international trade and in financial transaction was relatively small and was more than offset by “the costs of forcing heterogeneous populations with disparate histories, languages and cultures into a single nation”. These costs turned out to be – according to Barro – “prohibitively high”. This is very similar to what I have been trying to tell many audiences both at home and abroad in the last 10 – 15 years.

In good weather (in economic sense), even the non-optimal currency area could function (as all kinds of fixed exchange rate regimes did for some time). When bad weather came – e.g. the financial and economic crisis at the end of the last decade – all the weaknesses, inefficiencies, discrepancies, imbalances and disequilibria became evident and the monetary union ceased to properly function. This can´t be considered a surprise. In the past all fixed exchange rate regimes needed exchange rates realignments in due time which is another argument found in every elementary textbook.

The European Union decision-makers did not want to take this into consideration. Their way of thinking was evidently based on an almost communist type of reasoning: economic laws do not exist, politics may dictate economics. Some of us have been very sensitive to this for a very long time. People like me were raised in an era when such a mode of thinking was dominant in our countries of Central and Eastern Europe. Some of us dared to express our disagreement with it already in the past. We were considered enemies then, we are considered enemies now.

Europe should forget it, because there is time for a fundamental decision: should we continue believing in the dogma that politics can dictate economics and continue defending the common currency at whatever costs or should we finally accept that we have to return to economic rationality?

The answer to such a question given by the overwhelming majority of European politicians has been until now YES, we should continue. Our task is to tell them that the consequences of such a policy will be higher and higher costs for all of us. At one moment, these costs will become intolerable and unbearable.

We should say NO. The European politicians should be forced to admit that we find ourselves in a blind alley and that in such a case the only possible way out is the way back.

Such a decision can’t be made at one EU summit or another. It asks for a fundamental transformation of our thinking and of our behaviour. Europe has to undertake a systemic change, something we did 20 years ago in our part of Europe. Coming to such a decision needs a genuine political process, not the approval of a document prepared behind closed doors by a group of EU bureaucrats. It must arise as an outcome of political debates in individual EU member countries. It must be generated by the “demos” of these countries. There is no demos in Europe, there are just “inhabitants” of Europe.

The most imminent issue which asks for being addressed now is the Eurozone sovereign debt crisis. We should, however, be aware of the fact that this crisis is the tip of a much bigger iceberg. The crisis in Europegoes much deeper. Let’s accept that crisis is – in Schumpeter’s definition – a process of creative destruction. Not everything can be saved and maintained. Something must be destroyed or left behind in this process, especially the wrong ideas. We should get rid of utopian dreams, of irrational economic activities and of their promotion by European governments. Part of this implies that even some states must be left to fall. The opponents of such positions keep saying that such a solution would be costly. It is not true, the prolongation of the current muddling through is more costly. We have to explain to them that the costs they are afraid of are already here, the costs they have in mind are “sunk costs” already.

In his recent article “An American History Lesson for Europe” (The Wall Street Journal, February 3, 2012) the Nobel Prize Laureate in Economic Science Thomas J. Sargent reminded us that America paid off the individual states’ debt only once, in 1789, and that the American politicians were ready to do it at that moment because they took it as a price for acquiring independence from Great Britain. They correctly understood that it can’t be repeated. Fifty years later, in the early 1840s, the federal government declined to finance the states’ debts. “It led the states to discipline themselves by rearranging their constitutions in ways designed to allow them to retain freedom and responsibility for taxing and spending within their borders”.

Prof. Sargent added: “Europeans today might be tempted to say yes to bailouts. Or they might also recall a time when Americans preserved their own federal system by saying no”.

I think Sargent is right. Europeans should say NO and start introducing radical systemic changes which have to include the following measures:

1. Europe has to get rid of the unproductive and paternalistic soziale Marktwirtschaft, “augmented” (which means further undermined) by the growing role of the green ideology.

2. Europe should accept that the economic adjustment processes take time and that the impatient politicians and governments usually make things worse. The politicians should not try to mastermind the markets, to micromanage the economy, to “produce” growth by government stimuli and incentives.

3. Europe should start preparing comprehensive reductions of government spending and forget flirting with solutions based on tax increases. The reductions must dominantly deal with mandatory expenditures, because discretionary spending cuts are – as a long term solution – quantitatively more or less insignificant.

4. Europe should interrupt the creeping, but constantly expanding green legislation. The Greens must be stopped from taking over much of our economy under the banner of such flawed ideas as the global warming doctrine.

5. Europe should get rid of the excessive centralization, harmonization, standardization of the continent and after half a century of such measures start decentralizing, deregulating and desubsidizing its society and economy.

6.Europe should make it possible for countries which are the victims of the European monetary union to leave it and to return to their own monetary arrangements.

7.Europe should forget such plans as a fiscal union or a banking union, not to speak about antidemocratic ambitions to politically unify the whole continent.

8. Europe should return to democracy which can exist only at the level of nation-states, not at the level of the whole continent. It requires returning from supranationalism to intergovernmentalism.