Global Governance and its European Variant 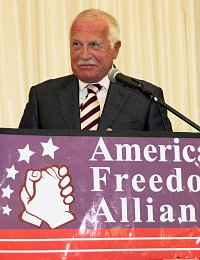 Many thanks for giving me a chance to come again to this very beautiful but also (as seen from Prague) very remote part of the world. Nevertheless, I strongly believe that I will be highly rewarded for the long journey by being here with all of you. Thank you for selecting this topic for the conference. Its title suggests the lack of politically correctness but it magnifies my pleasure to be here.

I am proud to belong to the very small group of people who consider both the ideology of global governance and the reality of the rapidly accelerating realization of this scheme to be one of the main threats to our liberty and democracy. The subtitle of the conference asks: “Is it the West’s Next Great Ideological War?” I am not sure. It could eventually be. However, as it looks now, it may become the West’s great ideological defeat. It will turn into an ideological war (waged with words, not weapons) only on condition we enter the arena.  If not, global governance will become our reality very soon and without much resistance.

I don’t have many colleagues among acting politicians who see it in a similar way and would be ready to come here. The speakers were asked to send to the organizers of the conference their recent texts devoted to the topic of our gathering. I sent three short pieces, one of which was my speech at the EU-Asia summit in Brussels less than two years ago. There were approximately 50 heads of states or governments from Europe, Asia and Australia there. I expressed my disagreement with global governance. Four people came to me after my speech and said: “excellent”. It was the president of Mongolia, the prime minister of New Zealand, vice-president of India and minister of foreign affairs of Russia. On the other hand, those who openly disagreed were participants from the EU countries. It was not surprising.

The situation is slightly better in the academic world. I do know some people there (such as John Fonte, John O’Sullivan, Keith Windschuttle, Roger Kimball, and a small group of others) who are as concerned as I am. I came here with a hope to enlarge the size of this group.

The people who gathered here feel very strongly about this issue. We came from different parts of the world and have our own historical experiences, sensitivities, biases and prejudices. I don’t hide that my approach is dominantly influenced by my frustrating experience with life in a communist, also globally governed empire. This sharpened my eyes and motivates me to speak out whenever I see symptoms of something similar in our contemporary, nominally still free and democratic world. The ambition to govern without a democratic accountability from a distant city is something I experienced for most of my life. Twenty-two years which have passed since the fall of communism represent only less than one third of my lifetime.

In the moment of the fall of communism we did not expect to lose our new freedom so quickly again in the name of another very dubious ideology. John O’Sullivan says that this is an ideology which doesn’t have the courage to be called by its name[1] and in his most recent article speaks about “soft totalitarianism”[2] which is a very appropriate designation of the world we are slowly but certainly entering.

Our task is to seriously look at the substance of the global governance doctrine (or ideology). I have neither the ambition nor – partly due to my presidential duties – enough time and concentration to make an attempt to comprehensively describe and analyze it. It is not necessary. We are lucky to have John Fonte’s book where he calls this doctrine “transnational progressivism”[3].

I do not intend to compete with his excellent writing. What I will try to do is to make a few comments on the recent European shift to trans- or supranationalism and to a continental-wide governance which has become the undisputable goal of most of European politicians (and their fellow-travelers) who control the EU and the European way of thinking.

The founding fathers of European integration (mostly French politicians) had similar centralistic and unifying ambitions already in the 1950’s but the real move towards such a political regime started a quarter century ago in the era of another, more contemporary French politician – Jacques Delors. His role remains well-known to most of us but it has been slowly forgotten by the majority of ordinary people in Europe. His era brought a fundamental change – integration turned into unification, Europe, till that time based on the cooperation of still  dominantly sovereign countries, was transformed into an entity composed of non-sovereign states led, organized, directed, controlled, regulated, standardized and harmonized from the “commanding heights” in Brussels.

In the communist past we looked at the gradual evolution of European integration from behind the Iron Curtain and for many reasons didn’t pay much attention to the undergoing changes there. After the fall of communism, after visiting for the first time Brussels, after our first personal contacts with the EU politicians and with the EU institutions, we immediately felt a problem.

Already at that time, I considered the change of the acronym –from EC (European Communities) to EU (European Union) – to be a fundamental change and was surprised that almost nobody paid attention to it or warned against its far reaching consequences. It was evident that Europe had entered a conceptually new era and started moving on a slippery “Road to Serfdom” (to use the famous Hayekian notion) – probably similarly as always in the past, which means unconsciously. The Western European intellectual elites did not criticize it because they – more or less – wanted it. They understood that is gives them an enormous opportunity. As always in similar situations, they became very active and very helpful fellow-travelers.

My current frustration is almost absolute and, again, my dominant feeling is the feeling of powerlessness. My predecessor in office is known world-wide for his essay “The Power of the Powerless” but what is not so well-known is that he was always a hard-core supporter of the ideology of global governance who held the nation states dismissively in contempt. He spoke about us as “čecháčkové”, to translate it as “narrow-minded little Czechs or Bohemians” is a very gentle translation.

Europe is not yet at the end of its journey. The de-democratization process goes on. The acronyms change further, together with the incoming stages of the unification process: EEC – EC – EU – EMU – EFU – EPU. We are now approaching the last but one stage, the European Fiscal Union, which looks for some people like a useful solution to the recent collapse of the previous stage, of the European Monetary Union. And there are further dreams on the side of the global governance adherents in Europe about moving towards the final stage – the full-fledged European Political Union which will undoubtedly become the global governance paradise.

To my great regret, the region of Central and Eastern Europe – with its unfortunate communist experience – isn’t of much help. I expected greater resistance among the citizens of these countries to such plans, but it hasn’t come. The people in these countries misinterpreted the European reality. They were not sufficiently attentive to its nuances and undergoing tendencies. They believed and still do believe that they were marching “back to Europe of democratic nation-states” whereas the direction in which they are going is “avanti into the supranationalist European Union”. The global governance exponents keep telling them that even the slightest criticism of this road is an implicit appeal to return to the Soviet Union-type state of affairs. It is difficult to convince the ordinary people that it is the other way round.

We who lived in communism know that fighting the concept of nation-states is very unfortunate. The current moving away from nation-states in Europe is based on an irrational but very easily embraced story that nation-states are responsible for wars. This is what the children are taught at schools. This is what the politicians in Europe repeat when they run out of arguments. I am afraid that it is much worse than we assume – they probably even believe in it. We must patiently argue that the only guarantee for peace is democracy, freedom and prosperity, not global governance.