Foreword to Prof. Plimer’s book How To Get Expelled From School 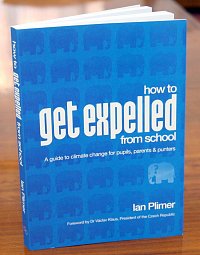 In the last decade, we have been authoritatively told and forced to accept that the Earth has been warming up. Some of us are not ready to accept that. Before fully acceding to the global warming alarmism, we want to know why, how much and how relevant (if not dangerous) the warming is or could be. Many politicians, journalists and activists among scientists pretend to know all the answers. According to them, it is caused by man and his irresponsible activities (by emitting CO2), as a result of which the warming will be unusually high and will have disastrous consequences. Moreover, “the science is settled”, they claim, which is not at all true.

There are many serious opponents, “skeptics“, “deniers“, people whose views are different. One of them is Prof. Ian Plimer. And me.

Prof. Plimer is a well-respected scientist, both in Australia and worldwide. He’s a professor at the University of Adelaide and at the University of Melbourne. He is Australia’s best known geologist. In his almost half a century lasting academic career, he has published more than hundred scientific books and papers.

In the last couple of years, he started addressing a wider audience. He reacted to the fact that one of his scientific disciplines – climatology – had been stolen by non-scientists who had been assisted by scientists who prefer TV performances, celebrity status, fame and luxurious life to the simple, solemn, pecuniarily less rewarding life of a scholar. He also understood the consequences of all that. He understood that climatology had converted into a servant of global warming doctrine which is not a science, but an ideology, if not religion, based on the idea that man, by emitting CO2, controls the global climate. This simplistic doctrine says that rising, man-made CO2 emissions drive up the temperature on Earth.

As a serious scientist who studied global climate fluctuations in not only hundreds or thousands, but millions of years, Prof. Plimer knows that there are other mechanisms behind the global climate and that the role of man-made CO2 emissions is – if any – very small, almost negligible.

There is no doubt that the scientific debate about this issue is still open but the public and political debate was prematurely closed and declared “decided“. That is the reason why Prof. Plimer moved from science to the public debate, to the dispute with the global warming doctrine and its adherents. His book “Heaven and Earth“, published in 2009, became a worldwide success and influenced public debate in many countries, most notably in “his“ own Australia. I learnt a lot from it and was honored to be asked to endorse it. I did it by saying – among other things – that “if I’d had a chance to read Professor Plimer’s book in advance, my own book on the subject of global warming would have been better.“[1]

As indicated by its subtitle “Global Warming: The Missing Science“, “Heaven and Earth“ is a very professional and sophisticated text which asks for studying, not just reading, and is, therefore, not easily accessible to everyone. That’s why Prof. Plimer wrote a sequel to it with a rather unexpected – and for some people perhaps confusing – title “How to Get Expelled from School“. The title suggests that the book is not a scientific text, that it is – as its subtitle indicates – “A Guide to Climate Change for Pupils, Parents and Punters“. This form of argumentation is a much needed contribution to the worldwide debate about this issue. I am only afraid that – with all its simplicity – it’s not a text for children. Even this book must not only be read but studied.

Investing in reading and studying this book will bring very high returns to everyone. We have to thank Prof. Plimer for his non-traditional approach as well as for his scholarly achievement.

Václav Klaus, Foreword to prof. Plimer's book How To Get Expelled From School, ConnorCourt Publishing, 2011