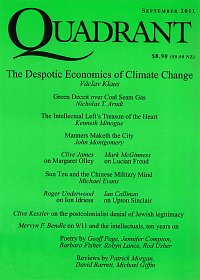 Thank you for the invitation to come to Sydney and to speak about the so called global warming problem (or climate change problem as it becomes fashionable to call it these days). I was here last time ten years ago and I am pleased to see that this beautiful city has not yet been significantly damaged by the global warming, that the sea has not reached the famous Opera House, that the consequences of the melting of glaciers in Antarctica are not visible here.

I am not surprised. I suspect the average temperature here in Sydney remained the same or even went down slightly in these ten years. I often quote the well-known Australian scientist Bob Carter who keeps repeating that “there is no climate emergency.” This elementary statement is, however, in a sharp contrast with the teaching of the global warming doctrine (GWD), with the rhetoric of many allegedly responsible, caring and far-sighted politicians and their fellow travelers in the media and academia, with the ambitions of international bureaucrats who try to justify the existence of their organizations by fighting the climate, with the non-scientific stances of money-from-grants-maximizing climatologists who try to attract world-wide attention, with the lobbyists from all kinds of business firms seeking to get into highly subsidized anti-global warming projects, etc.

I have been trying to argue that the Global Warming Doctrine is fundamentally wrong for many years now.[1] I presented my views in tens or perhaps hundreds of speeches, articles and interviews all over the world and my book “Blue Planet in Green Shackles” has been translated into 17 languages, including English. This book of mine is not a study in climatology, it could be better described as an essay in political philosophy and economics of global warming. The subtitle of the book which asks: “What is Endangered: Climate or Freedom?” suggests what my topic is.

As an economist, I think in terms of trade-offs, not in terms of one-sided, one-way looking considerations only. Regardless of whether we deal with an actual or only fictional global warming, we should know that even if something is detrimental and gives rise to some costs (and losses), it is not rational to reduce it to zero. The economists often provoke people by talking about the optimal level of pollution (or of global warming) but it is their task to do so. Their science tells them that there is a trade-off between the (eventual) damage that results from the global warming and the costs of fighting it. That is the reason why they suggest adaptation, not mitigation.

When I had a chance to be at the UN Climate Change Conference in New York City in September 2007 and was asked to speak either in the “mitigation section” or the “adaptation section”, I chose the second option without the slightest hesitation. It was – not surprisingly – sparsely attended. The global warming alarmists are not interested in our adaptation because they don’t want to let us voluntarily adapt. They want to change us, to change our behavior, our way of life, our values and preferences, they want to restrict our freedom because they themselves believe to know what is good for us. They are not interested in climate. They misuse the climate in their goal to restrict our freedom. Therefore, what is endangered is freedom, the climate is OK.

It is very special to discuss this issue in Australia. On the one hand, there are very strong anti-global warming voices in the academia and in the media – I see it at a distance by regularly reading the Quadrant and the Policy, less regularly The Australian, by studying the books by Ian Plimer, Bob Carter and others which I consider an obligatory reading. Yet the views of the politicians go in the opposite direction. If I am not wrong, Australia and Great Britain are the only countries in the world with a Department for Climate Change and with something like the Garnaut Climate Change Review. The situation in many other countries is similar, but the gap between the independent thinkers and the government seems to be slightly smaller.

I didn’t come here to give advice, I came to present arguments I see crucial from my own perspective. It is the perspective of an economist from a former communist country turned politician who – on the basis of his life-long experience and his belief in the teachings of economics – has very strong views about the free markets vs. government masterminding dilemma and who started to criticize the environmentalist doctrine already in the 1970s, in the moment of the birth of the irresponsible fantasies of the Club of Rome.

The environmentalists had been arguing for decades that we should reduce our consumption of fossil fuels – but for another reason. They naively warned against the exhaustion of natural resources which proved to be a total nonsense. They talked about the population bomb. They talked about imminent mass poverty and the inevitable starving of billions of people. The same people – shamelessly and unhumbly – talk about dangerous global warming now. They don’t care about resources, poverty or pollution – they hate us, the humans, they consider us selfish and sinful creatures who must be controlled by them. I used to live in a similar world – called communism – and I know that it led to the worst environmental damage the world has ever experienced.

The Global Warming Doctrine is an ideology, if not a religion, which lives more or less independently on the science of climatology. Climate and temperature are used or more often misused in an ideological conflict about human society.

This doctrine, this new incarnation of environmentalism, is not a monolithic concept that could be easily structured and summarized. It is a flexible, rather inconsistent, loosely connected cascade of arguments, which is why it has been so successfully escaping the scrutiny of science. It comfortably dwells in the easy and self-protecting world of false interdisciplinarity (which is nothing else than the absence of discipline).

I see the structure of this doctrine in the following way:

1. It starts with the claim that there is an undisputed and undisputable, empirically confirmed, statistically significant, global, not regional or local, warming;

2. It continues with the argument that the time series of global temperature exhibits a growing, non-linear, perhaps exponential trend which dominates over its cyclical and random components;

4. The temperature growth is interpreted as a man-made phenomenon which is caused by the growing emissions of CO2. These are considered the consequence of industrial activity and of the use of fossil fuels. The sensitivity of global temperature to even small variations in CO2 concentration is supposed to be high and growing;

5. The GWD exponents promise us, however, that there is a hope: the ongoing temperature increase can be reversed by the reduction of CO2 emissions;

6. They also know how to do it. They want to organize the CO2 emissions reduction by means of directives (or commands) issued by the institutions of “global governance”. They forget to tell us that this is not possible without undermining democracy, independence of individual countries, human freedom, economic prosperity and a chance to eliminate poverty in the world. They pretend that the CO2 emissions reduction will bring benefits which will exceed its costs.

Following very carefully the global warming debate, I am not convinced about any one of these statements. The scientific counter-arguments are very strong and available to all of us. I will not repeat them now. My question is: What can the field of economics say to all that?

1. The economists do not believe in the precautionary principle and do not see the outcome of the cost-benefit comparisons of CO2 emission reductions as favorably as the GWD adherents. The economists know that energy demand and supply patterns change only gradually. They have evidence of the very high degree of stability in the relationship between man-made carbon dioxide emissions, economic activity and the emissions intensity. They do not expect a radical shift in this relationship because the emissions intensity (as a macrophenomenon) moves only very slowly and does not work wonders. The economists are, therefore, convinced that the very robust relationship between CO2 emissions and the rate of economic growth is here and is here to stay.

If someone wants to reduce CO2 emissions, he must either expect a revolution in economic efficiency (which determines emissions intensity) or must start organizing a world-wide economic decline. Revolutions in economic efficiency – at least in relevant and meaningful time horizons – were never realized in the past and will not happen in the future either.

2. The relationships studied in natural sciences are not influenced by any rational (or irrational) behavior, by subjective valuations of the variables in question, or by the fact that people make choices. In social (or behavioral) sciences, it is different. Making a rational choice means paying attention to intertemporal relationships and looking at the opportunity costs. It is evident that by assuming a very low, close to zero discount rate, the proponents of the GWD neglect the issue of time and of alternative opportunities.

Using a low discount rate in global warming models means harming the current generations (vis-à-vis the future generations), and the undermining of current economic development means harming the future generations as well. Economists representing very different schools of thought, tell us convincingly that the discount rate – indispensable for any intertemporal calculations – should be around the market rate, around 5%, and that it should be close to the real rate of return on capital because only such a rate is the opportunity cost of climate mitigation.

We should never accept claims that by using a low discount rate we “protect the interests of future generations” and that the opportunity costs are irrelevant because in the case of global warming “the problem of choice does not exist”. This uneconomic or better to say anti-economic way of thinking must not be accepted.

3. As someone who experienced communism, central planning and all kinds of attempts to organize the society from above, I feel obliged to warn against the arguments and ambitions which sound very similar to those we had to live with decades ago. The arrogance with which the GWD alarmists and their fellow-travelers in politics and media want to suppress the market, control the society, dictate the prices (directly or indirectly by means of various interventions, including taxes) is something I know well. All the old, already almost forgotten economic arguments against communism should be repeated now. It is our duty to do so.

To summarize my position:

- I don’t see any real climate threat connected with global warming in a meaningful time horizon;

- I do see measures – already introduced or planned for the future – which substantially endanger our freedom;

- I do see a very irrational, wasteful allocation of scarce resources which endanger our prosperity. Extremely costly mitigation measures are undertaken instead of addressing more pressing needs, especially connected with poverty in many parts of the world;

- I do know that the fight with the climate has no meaning because it can’t be won.

Fighting (or, as the Australian scholar Ray Evans nicely puts it, controlling) the climate is a mistaken ambition. In a recent paper, Lord Monckton reminded us that “the IPCC takes CO2´s mean atmospheric residence time as 50-200 years, in which event very little reduction in warming will occur within the 21st century.”[2] He rightly stresses that “any mitigation policy that is cheap enough to be affordable will be ineffective, while any mitigation policy costly enough to be effective will be unaffordable.”[3]

Let’s stay with our genuine adaptation. I was positively surprised to see that my adaptation capabilities proved sufficient enough to survive the move from Prague to Sydney without any problem.

[1] As Ed Feulner correctly reminded me, I warned against it in a speech at Heritage Foundation in Washington D.C. already in 1993 (in Ed Feulner, Václav Klaus – Champion of Freedom, in “Festschrift for Václav Klaus”, Fragment, Prague, 2011.)