Hlavní strana » English Pages » Is Freedom in the Western…

Is Freedom in the Western World Guaranteed Today? 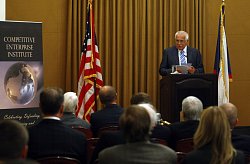 Thank you for the invitation to the CEI and for the opportunity to address this distinguished audience.

I remember quite vividly my previous encounter with your Institute – a speech in May 2008 devoted to my Czech compatriot, great economist, Joseph Alois Schumpeter and his views about the end of capitalism[1]. My feeling was that we both – me as a speaker and you as the audience – believed that Schumpeter was wrong in his pessimism and that in spite of the many threats we saw around us capitalism would survive. You probably released the text of my speech to the many supporters of your Institute all over your country because I got hundreds if not thousands of very friendly, supportive and positive letters and cards from them.

I also remember your honoring me with the Julian Simon Award. Julian Simon was an optimist and one of the few fellow-economists who believed in capitalism, who defended it and who statistically demonstrated that capitalism had been successful. I am convinced he was right.

I should also mention that the Competitive Enterprise Institute published the English translation of my book “Blue Planet in Green Shackles” which is thanks to it known in many places of the world now. The book has already 17 different language editions.

In my speech at the recent Ambrosetti Forum in Italy I argued that Europe has to get rid of the unproductive and demotivating concept of the “soziale Marktwirtschaft” (you would call it “welfare state”) which, of course, was not greeted by the mostly European audience there. The former EU commissioner Mario Monti replied that Europe needs a “competitive soziale Marktwirtschaft” which is, of course, a contradiction in terms, because these two adjectives do not go together. It motivated me also to think about the reasons for your putting the term “competitive” in the title of your Institute. Do you want to compete with other institutes? Or does it mean that you are in favor of competition? Perhaps something else? I was not sure about it.

My today’s visit takes place in a challenging era, challenging for us in Europe, but I am afraid – similarly – for you in America:

- both in Europe and in America, we experience years of a very  unimpressive recovery that follows after an unexpectedly deep financial and economic crisis. We know that this crisis was caused by a series of well-documented government failures and that the crisis was not a market failure as it is fashionable to argue these days;
- there is an undeniable crisis of the whole concept of European integration (whose most visible “tip of the iceberg” is the Eurozone debt crisis);
- we witness an evident, extremely rapid economic rise of the so called BRIC countries (and their neighbors), and their more and more active participation and influence in world events;
- we are confronted with a world-wide mass hysteria connected with the totally irrational global warming propaganda;
- we are not successful when it comes to blocking attempts to get rid of traditional democracy (which is connected with the institution of a state) and to replace it with global governance organized by experts and public intellectuals chosen without any democratic accountability;
- our criticism of all that is silenced by the aggressive imposition of the tyranny of political correctness, which is nothing else than a misnomer for officially sanctioned hypocrisy.

In comparison with my life in communism, I live in an infinitely better world now, but it is a world which is more disappointing than I had expected it to be in the moment of the fall of communism. My hope was to live in a more free and liberal (in the European, not American sense of the word) society than I see around me now. Your country did not go through such a radical transition, but you may feel it similarly.

The movement towards a less free and more controlled and administered society is not the outcome of emergency endeavors to solve threatening real problems – like the really dangerous global warming or the actual exhaustion of mineral resources or of oil, or because of the strengths of our external enemies – like Taliban, al Qaeda or Islamic fundamentalism. As I see it, the problem lies in ideas, in policies (based on these ideas) and in human behaviour influenced, motivated and justified by both these ideas and policies.

I am afraid of ideas and policies that suggest that freedom and democracy should be restrained in favour of “higher goods and values”, that following private interest is wrong, that public interest should be dominant, that the politicians act altruistically in public interest and know what it is, that the ordinary people are not rational and moral and must be, therefore, controlled, guided and made better by those who know what is good for them. The result is a growing disbelief in the power of free markets and of parliamentary democracy and a growing belief in the omnipotence of state dirigism and in the omnipotent wisdom of public intellectuals.

It can be seen in many, very diverse fields:

- we all care about human rights but some us are afraid of humanrightism;
- we are enriched by other cultures but not by multiculturalism;
- we may respect homosexuality, but not homosexualism;
- we have to guarantee equal rights for women, but have many reasons to criticize feminism;
- we are all members of various voluntary associations, now fashionably called NGOs, but consider NGOism another threat to our liberty.

I will limit this address to the discussion of two threats I see as the most relevant ones now – to environmentalism and to a tendency towards denationalization of countries and towards global governance.

Talking about environmentalism, I do not have in mind the practical and rational debate about preventing environmental degradation which is – no doubt – our obligation. I have in mind environmentalism as an ideology. Its adherents only pretend to be interested in environmental protection, in reality they try to radically reorganize and change the world, human society, all of us and our behaviour, as well as our values. Especially its current version – global warming alarmism – has become the most dangerous vehicle for the suppression of freedom and for the advocacy of large scale government masterminding of our lives.

I tried to comprehensively discuss this issue in a book I already mentioned. We have to keep repeating the elementary questions of the global warming debate and to insist on receiving serious answers from the exponents of this doctrine:

1. Do we live in an era of a statistically significant, non-random, non-cyclical global warming?
2. If there is such a global warming, is it beyond natural temperature fluctuations and is it dominantly man-made?
3. Is it the result of CO2 emissions?
4. Is the warming so big that we will suffer from it?
5. Should it bother us more than many other pressing problems we face? Should it receive extraordinary attention at the expense of other competing problems? Is the mitigation of global warming the best allocation of our scarce resources?
6. If we want to control the climate, can it be done at all?

My answer to all of these questions is NO. A very careful reading of the global warming debate tells me that there is no scientific consensus – propagandistically proclaimed by the exponents of the GWD – that the answer YES is appropriate. To pretend that there is such a consensus is morally and intellectually deceptive. As an economist, I feel obliged to extend the ongoing debate

- by stressing the positive role which has been and will be played by technical progress, especially in the long run – on condition we do not stop it;
- by asking for correct dealing with the concept of externalities;
- by insisting on rational risk-aversion instead of reliance on the precautionary principle;
- by proper discounting of the future;
- by respecting the ongoing demand shifts based on the well-documented positive long-term interaction between growth of income and wealth and environmental issues. One thing is clear: the consequences of climate changes – if there are or will be any – will be solved like any past changes and challenges by the market and human ingenuity, not by government masterminding.

The second issue which bothers me is the accelerating move towards global (in our case even more dramatically towards European) governance which means towards the weakening of the traditional pillar of democracy – of the nation state. It is very fashionable to argue now that due to globalization, which means internationalization of human activities, we need global governance. I do not agree. The fact that similar problems occur in many countries does not mean that they are global and that they should be confronted by using less of markets and more of governments. The unstoppable and basically positive internationalization of human activities doesn’t ask for centralistic solutions.

The solution of the pressing problems of our era doesn’t lie in creating new governmental and supranational agencies. It is also not about the technicalities of these solutions. It is about democracy and democracy needs demos, democracy needs citizens and citizenship – without them democracy cannot be constituted. We can’t have democracy at the level of the European Union, with 27 different nation states. Similarly, there can’t be democracy at the level of the world. It is possible to have an efficient intergovernmentalism but not a democratic world-wide supranationalism. Recent attempts to start organizing global governance on the basis of organizations like G20 are unacceptable.

A special case is Europe. In the 1950s, the leading idea behind European integration was to liberalize, to open-up, to remove barriers at the borders of individual European countries, to enable free movement of not only goods and services but of people and ideas around the European continent. It was a positive concept. The situation changed during the 1980s and the decisive breakthrough came with the Maastricht Treaty in December 1991. Integration had turned into unification, liberalization into centralization of decision making, into harmonization of rules and legislation, into the strengthening of European institutions at the expense of institutions in member states, into the growth of democratic deficit, into post-democracy.

It was shifted further in the same direction by the Lisbon Treaty in 2009. The EU has been gradually changing from community of cooperating nations to the union of non-sovereign entities. We see that the move towards an “ever-closer Europe” – without an authentic European identity and a European demos – leads to the accelerated formation of supranational bureaucratic structures. It tends to restrain freedom, democracy and democratic accountability, not to speak about economic efficiency, entrepreneurship and competitiveness.

The recent problems with the euro demonstrate it quite convincingly. When I had been criticizing the concept of the artificially created European common currency for the last two decades, no one wanted to listen. It does not give me any pleasure to see now that I was right. It would have been better for me – as for someone who lives in Europe – if I were wrong.

Let me conclude by saying that fighting for freedom remains the issue of the day even in the 21st century. We should not become victims of new progressive “isms” dreaming about changing the world and perfecting the men. We should stand up for our good old conservative beliefs and convictions. Both in Europe and in America.

The earlier version of the speech was delivered for the Institute of Public Affairs in Perth, Australia, July 28, 2011.

[1] Is Schumpeter’s Vision of the End of Capitalism Relevant? The Competitive Enterprise Institute Annual Dinner, 28 May 2008, Washington D.C. Available at www.klaus.cz/clanky/1548.