Dinner address in honor of His Royal Highness Henri, Grand Duke of Luxembourg 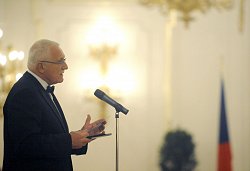 I am, and I am sure we all are, delighted to welcome you in the Czech Republic. I remember a similar, very friendly dinner in your beautiful historic palace in the city of Luxembourg four years ago. I also remember that we both – Your Royal Highness and me – officially opened very representative premises of the Czech embassy in the house of Pierre Werner the following day.

We are pleased, Your Royal Highness, to have you here in the year, which marks the 700th anniversary of the accession of the Luxembourg dynasty to the Czech throne. In a few days, on 3rd December, it will be exactly seven centuries since the moment when Jan Lucemburský (John of Luxembourg) arrived in Prague with his wife Eliška Přemyslovna (Elisabeth of Premyslides). It was here, at the Prague Castle, where the royal couple was crowned in February 1311.

Since then, the name of the Luxembourg dynasty has been part of the Czech history. It is not possible to name all the personalities and events or to mention all the historical and personal ties through which our two countries have been connected since but at least the name of Charles IV must be mentioned. It was under his rule when Prague became the political centre of the Holy Roman Empire and the cultural capital of Central Europe. It is symbolic that you, Your Royal Highness, have visited the Karlštejn Castle today, a place which Charles IV built for safekeeping of the royal treasures. I should also add that it was Charles IV who elevated the County of Luxembourg to the rank of Duchy in 1354.

This year’s anniversary is being commemorated in the Czech Republic in many ways. There is an exhibition – which Your Royal Higness has seen today – called “A Royal Marriage” taking place in the very heart of the Old town where Jan Lucemburský used to live with his wife. The central banks of both countries issued a commemorative coin, both post offices issued a special stamp, this year’s music festivals in Litomyšl and Jihlava hosted musicians from Luxembourg, there will be a special exhibition in the city of Ostrava and other cultural events.

Our contemporary relations have many dimensions. There are guests with us at this table tonight who contribute to the cooperation between our two countries in various fields. Ladies and gentlemen, I would like to thank each one of you.

Your Royal Highness, we take your today’s visit as an important gesture and a confirmation of the very high level of many centuries’ lasting relations between our two countries. I hope you feel welcomed here.