Global Warming Alarmism is a Grave Threat to our Liberty 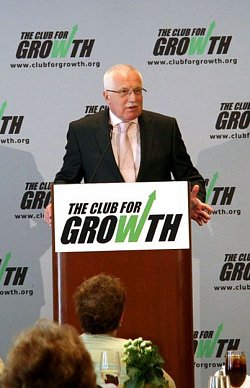 Thank you for giving me the chance to address this distinguished audience and for asking me to speak on one of the issues I consider absolutely crucial. I am convinced that the ideology of environmentalism, particularly its extreme variant, the global warming alarmism, and its widespread acceptance by politicians, journalists and all kinds of leftist intellectuals is the main threat to freedom and prosperity we are facing today.

I feel very strongly about this issue and keep warning against it by writing and speaking – in my own country, the Czech Republic, in Europe, in America and elsewhere. My last speech devoted to this topic was in Cairo, Egypt, less than a month ago. Three years ago, I put my arguments into a book with the title “Blue Planet in Green Shackles”, which is now available in 15 languages, including English but also for example Arabic or Japanese. My experience tells me that making speeches, lecturing, writing articles and books, giving interviews and participating in media discussions is helpful but not sufficient. These efforts have to be supplemented by political activity and if I understand the ambitions of the Club for Growth and of this conference correctly it is an attempt in this direction. That is most commendable. This is the reason why I accepted the invitation to come all the way from Prague to Palm Beach. An additional positive effect is that the temperature here is much warmer than in Prague just now. You are “locally” warmed and I will confirm back in Prague that you survive such a dangerously warm climate without major inconveniencies.

To criticize environmentalism is for me not a new, suddenly discovered, fashionable or trendy activity. At the beginning of the 1970s I came across the first publications of the infamous Club of Rome, which tried to scare us by predicting an imminent exhaustion of natural resources and by asking for a radical change in our behavior.  Its supporters had been arguing already then very dramatically that we should reduce our consumption of fossil fuels but – and we should not forget it – for different reasons than now. As an economist, I knew it was a wrong argumentation and the subsequent four decades proved it quite convincingly. Today, we have more proven deposits of basic raw materials and energy resources than 40 years ago. I felt already then that this was an arrogant, elitist and dirigistic doctrine attempting to stop economic growth, the overall social development and human progress.

At that time, I myself lived under a very oppressive, destructive and totally irrational, and therefore unproductive, communist regime and was not able to participate in the worldwide polemics with these views. People like me were not allowed to travel to the West, or even to dream about having a chance to publish articles or make speeches abroad. Yet, I was very frustrated and could not understand how it was possible that such an irrational doctrine was not easily and convincingly refuted and rejected in the free western world.

In 1989, communism collapsed and we were finally free. To my great surprise, the environmentalist doctrine was still alive and even flourishing in its new incarnation called global warming doctrine. In 1992, the Rio Earth Summit endorsed the doctrine of global warming and climate change as a leading ideology of our times. I expected that the ideology of the free world would be based on freedom, parliamentary democracy and market economy – concepts that were absolutely crucial for us in the former communist countries in the moment of our radical and revolutionary transition from communism to free society. Life under communism made us extremely sensitive, if not oversensitive to all possible symptoms of violation and erosion of our freedom. That is the reason why I feel endangered now. The subtitle of the above mentioned book asks “What is endangered: Climate or Freedom?” My answer is resolute: climate is ok, what is under threat is freedom.

The reason is that environmentalism and its most extreme version, global warming alarmism, asks for an almost unprecedented expansion of government intrusion and intervention into our lives and of government control over us. We are forced to accept rules about how to live, what to do, how to behave, what to consume, what to eat, how to travel and many other things. Some of us had experienced similar examples of such manipulation with ourselves in the communist era and feel obliged to do everything we can to avoid similar developments in the future.

It is, however, not only about freedom. Environmentalism also wants to suppress economic growth, reduce prosperity and hinder human progress. When I was recently in Egypt on the occasion of the launching of the Arabic version of my book, it became obvious to me that the people there care more about the continuation of their economic development than about freedom as we understand it. Some of us know that freedom and prosperity cannot be separated but it is evident that environmentalism – as the recent Copenhagen conference demonstrated – wants to impair prosperity and stop human progress especially in the developing world. And that is unacceptable.

The environmentalists ask for substantial reduction of carbon dioxide emissions. When it happens – with our current technologies – it will substantially increase the costs of energy for everyone because it would imply restrictions on the use of oil and coal, which are no doubt much cheaper than all alternative energy sources. Cheap energy is the source of much of our life-style and our prosperity. When energy prices go up, the costs of nearly all other goods and services go up as well. All carbon taxes, cap-and-trade schemes and wind and solar power subsidies are steps in the wrong direction, leading to a severe and protracted economic hardship for little or no benefit.

My lifelong experience tells me that I have to start protesting very loudly when someone tells me: “Don’t trust the market, trust me and us.” This is what I had been hearing for 40 years of my life under communism and I am not ready to accept it now. The belief in the possibility of controlling the Earth’s climate by reducing the anthropogenic emissions of carbon dioxide, I call it the theory of climate control, is as irrational, arrogant and pretentious as the communist planning that people like me were objects of for so many years.

As I said, politicians bought into this doctrine at the Rio Earth Summit in 1992, fell in love with it and started organizing a whole set of economically damaging and freedom endangering measures. They came to the conclusion that playing the global warming game is an easy, politically correct and from the point of potential election gains very profitable card to play (especially when it is obvious that they themselves will not carry the costs of the measures they are implementing and will not be responsible for their consequences).

There are plenty of arguments suggesting that the real threat for human society is not global warming itself. The real threat comes when politicians start manipulating the climate and all of us.

In my views, I am not being influenced by the recent scandals connected with the work of the IPCC and some of its leading exponents. All of that has been known for years to everyone who was interested. The same is true about all the relevant arguments used in today’s debate. They are available and it is difficult to add anything fundamentally new to them. It is necessary to keep stressing several basic facts and arguments that are well-known, but unfortunately largely ignored.

First, the statistically well-documented increase in global temperature has been until now very small and not bigger than the temperature fluctuations in the last centuries and millennia. Throughout the whole 20th century, with all the problematic data collection and adjustments – it was only 0.74 °C. I am surprised again and again that – because of the power of the environmentalist propaganda – people suppose it was much more.

Second, it is undisputed that there has been no statistically significant net global warming in the last twelve to fourteen years. I know that this is not a proof of the impossibility of long-term climate changes but it is a relevant piece of information which should not be ignored or downplayed. New data and new theories are emerging every day and some of them suggest the probability of future cooling, not warming.

Third, the scientific dispute about the causes of the undergoing climate changes is not over, it continues. Despite contrary assertions, there is no scientific consensus about it. What is more and more evident is that CO2 is losing the position of the main culprit and that its potential impact has already been more or less “consumed.” Simple, monocasual theory of functional relationship between CO2 and temperature is evidently untenable. There is absolutely no linearity between CO2 emissions and temperature.

Fourth, the idea of a static, unchanging climate is, no doubt, foreign to the history of the Earth. The climate has always been changing and will always be.

I am convinced that the impact of the small climate changes we have experienced (and may experience in the foreseeable future) upon human beings and all kinds of their activities is – because of their size – practically negligible. In its model simulations, the IPCC suggests that – because of higher temperatures – the world GDP in the year 2100 will be 2.9% lower than without any warming. I repeat, only 2.9% if we do nothing and let the warming – predicted by the IPCC – continue. The same models suggest that the GDP per capita in the developed countries will be eight times higher than now and in the developing countries about five times higher than that of the developed world today.

These figures are not mine, these are the figures of the leading exponents of the global warming doctrine. The question must be therefore raised: should we drastically limit CO2 emissions today by 20, 30, 50, or 80% and, thereby, abandon our way of life for the sake of such a small effect considering that the future generations will be far better off than we are today? My answer is that 2.9% of the future GDP is a minor loss. A loss generated by a completely useless fight against global warming, planned by the contemporary global warming alarmists, would be far greater.

Politicians, their bureaucrats as well as many well-meaning individuals who accept the alarmist view of anthropogenic climate change probably hope that – by doing so – they are displaying intelligence, virtue and altruism. Some of them even believe they are saving the Earth. We should tell them that they are merely passive players in the hands of lobbyists, of producers of green technologies, of agrobusiness firms producing ethanol, of trading firms dealing in carbon emission rights, etc., who hope to make billions at our costs. There is no altruism there. It is a political and business cold-hearted calculation.

Before concluding, I have to repeat my question: “What is endangered?” My answer is: “our freedom, and our prosperity.”

One last comment. I very often see that people confuse two different things – a necessary protection of the environment (necessary because there is no doubt that we have to take care of the rivers, lakes, seas, forests and air) and an irrational attempt to fight or to protect the climate. I am very much in favor of rational efforts when it comes to environmental protection, but I resolutely reject any attempts to change or – as I frequently hear – to combat climate.