1) Dear Brexit friends, it is a great honour and pleasure for me to be here with all of you. To be here as the only foreign but I would like to stress as a friend of your country. I have to express my gratitude to my good friend Nigel Farage for inviting me. 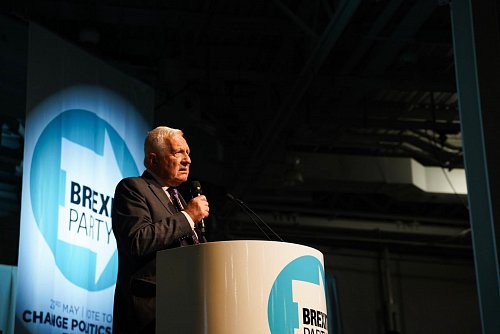 2) You should know that you have many friends in the Czech Republic – generally, but as regards Brexit specifically. Many of us opened Champagne bottles when we heard the first results of the British Brexit referendum three years ago. It was a great event for us. We considered it not only your victory, it was victory of all European democrats, it was our victory as well. The Brexit referendum was not only about Great Britain; it was about Europe as a whole, about the EU and about us in the Czech Republic.

3) We, the Czechs, are in many respects the same or similar critics of the EU arrangements, of the EU post-democracy, of the EU non-sensitivity and arrogance, of the EU non-democratic substance. We – similarly as you – want to make decisions about ourselves in Prague, you want to decide about you country here in London, not in Brussels. It is that simple. All other interpretations are wrong and misleading.

4)   Your Brexit decision was a historic event. The less expected it was, the sweeter it was. It changed Europe it. It was a fatal blow to the pride of all European mandarins, to the pride of the European Union nomenclatura. Many people supposed, wrongly, that Brexit has been achieved just by the referendum. They were wrong.

5) The EU political elites didn’t want to accept it because they didn’t want to come to a positive solution. They also wanted to punish, to denigrate, to humiliate Great Britain as much as possible. They wanted to demonstrate to all other EU member states that there is no a friendly exit from the EU, that especially the small countries don’t have a chance to leave it.

6) The EU behaviour asked for a resolute, clear and decisive British stance. It – to our great regret – didn’t come. Your country was and stays divided, was and stays hesitant. Your politicians were not able to rationally react. They probably didn’t expect such a merciless and ruthless EU behaviour. Not to expect it was, however, a great mistake.

7) As I looked at it from Prague the British main political parties totally failed and betrayed and abandoned the British citizens, their voters. It had, however, one positive side-effect. By doing it they – probably unwillingly – created the Brexit Party, created you. They helped Nigel Farage to do it.

8) I know you didn’t expect to participate in these European elections but you have to. Without you, without Nigel Farage, without the Brexit Party, the British indecisiveness would continue. You have to win the elections and to get a strong mandate to influence the political stance of your country.

9) Dear Brexit friends, you should give all of us in the rest of Europe a good example. Many Europeans need it and many are waiting for it. Don’t disappoint them. I am proud to be here with you tonight.

Václav Klaus, Notes for the speech at the Brexit Party Rally, Olympia London, London, May 21, 2019.