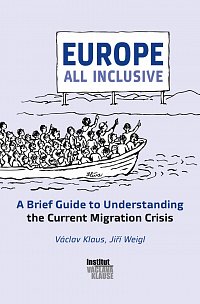 The current flood of information has brought about an unprecedented devaluation of words. Quantity debases quality. The media compete with one another to spread the worst and most alarming news. Words like "crisis" have become part of our daily vocabulary, – like "war", "murder", "disaster", "catastrophe" – but they are slowly losing their capacity to induce fear. We are confronted with real or – often – only virtual new crises all the time. When their potential is used up by the media, they are replaced by new ones.

It can therefore easily happen that a serious crisis can be fatally underestimated. Our concern is that such a moment has arrived. The current migration crisis is a serious and until now severely underestimated phenomenon. This tiny book should serve as a warning, one that is greatly needed today.

When the financial and economic crisis of 2008-2009 (probably the biggest in the last 80 years) ended in a stalemate and without the usual healthy recovery, the debt crisis of the hitherto relatively stable Eurozone countries began. Its recent culmination in Greece (again lacking any solution) was another big event. Two years ago we saw the start of the long-prepared and long-expected Ukrainian crisis, often wrongly (probably deliberately) interpreted as a Russian-Ukrainian conflict. Now we witness the migration crisis, which is being tragically underestimated and played down by the European elites. This latest crisis is shaking the continent in an unprecedented way.

All these crises, despite their differences, have a lot in common. Maybe that is why one replaces the other so easily. They serve as yet another example of the irresponsible activism of the political, media and intellectual elites of Europe and the entire West, bringing further limitations to human freedom and political democracy without allowing events to run their natural course.

We are strongly convinced that the current migration crisis is not just another one of the many so-called crises. The ongoing massive migration wave, which is unfortunately still far from reaching its peak, is comparable to the "barbarian" invasions of the ancient world that caused large-scale regression in the development of Europe which it took several centuries to overcome. Later, Europe successfully faced similar attempts by Arabs, Mongols, and Turks, often at the cost of immense suffering and losses. What we see today is a similarly fundamental challenge to the future of Europe.

Unlike in the past, it is unfortunately not clear whether today the will exists to defend ourselves. We lack a consensus on whether there is a need or reason to defend anything. Europe, and especially its "integrated" part, is riddled with hypocrisy, pseudo-humanism and other dubious concepts. The most dangerous of them are the currently fashionable, and ultimately suicidal, ideologies of multiculturalism and humanrightism. Such ideologies push millions of people towards resignation when it comes to concepts like home, motherland, nation and state. These ideologies promote the notion that migration is a human right, and that the right to migrate leads to further rights and entitlements including social welfare hand-outs for migrants. Last but not least, Europe is weakened by the leftist utopia of trying to transform a continent that was once proud of its past into an inefficient solidaristic state, turning its inhabitants from citizens into dependent clients.

The current European elites are behaving irresponsibly by defending and disseminating such ideas, regardless of whether they do so intentionally or not. The consequences of such activities do not yet fully and directly affect them or their families. Their leaders probably think that will never happen because their era will not be followed by infamous Biblical floods (not caused by excessive amounts of water this time, but instead by global warming.)

We cannot afford the luxury of such irresponsibility, and that is why we attempt to formulate and analyse the essential aspects of the migration crisis in this little booklet. We are aware of the fact that each of our subtopics is complex enough to be treated as a separate book, but we think that our brief guide does describe the key issues and provides a comprehensive overview of the whole issue. We do not attempt to bring an academic text with an impressive number of references to famous authors. It is indeed a brief handbook only.