The European Freedom Award in the Freedom Endangering European Union 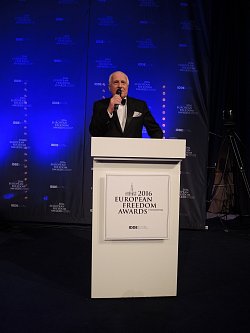 Many thanks for bringing me to Stockholm and for conferring upon me the European Freedom Award. I am really honoured, because the growing loss of freedom is my main concern. Let me express my gratitude to the Institute for Direct Democracy in Europe, to its General Manager Laure Ferrari, to its Vice-President Peter Lundgren and to all of you for choosing me to be the very first laureate of this award.

I have never got an award from a Brussels-based institution. It is a special feeling. It proves that there are also some freedom-friendly institutions in Brussels. Your decision, nevertheless, indicates courage and independence. The European political elites, the representatives of a new species I call homo bruxellarum, would prefer other candidates for an award which contains the adjective “European”.

I am more interested in the noun freedom. For me, for someone who was born and spent his whole life in Central and Eastern Europe, the word freedom has always been absolutely fundamental. Due to my life experience I do hope that I am able to fully appreciate the meaning of it. It is by no means a mere abstract term. It is part of my life.

For us, who spent decades, in my case the most productive years of my life, in the oppressive communist political and economic system, the term freedom has become an embodiment of our dreams and hopes. The word freedom meant more for us than for people in Western Europe and America who lived in freedom and, therefore, took it for granted. We were deprived of many liberties and opportunities which were quite normal in Western countries. We lost a lot, but we also got a chance to learn something very important.

As a consequence, we are able to appreciate the true meaning of freedom and we have become sensitive, if not oversensitive, to all symptoms of its weakening.

The fall of communism opened the door for freedom and democracy in our countries. We enjoyed it tremendously and erroneously supposed that freedom is here, and is here to stay. We were wrong. During the 27 years after the fall of communism, we have slowly begun discovering that we live in a world which is different than the one we dreamt of. It became evident that the lack of freedom is not inevitably connected with only one – however evil – form of totalitarian and authoritarian regime, with communism. There are other non-democratic isms and institutional arrangements which lead to similar results and consequences.

Due to them we live in a far more socialist and etatist, controled and regulated society now than we could have imagined 27 years ago.We feel that we are in number of respects returning back to the arrangements we used to live in the past and which we had considered gone once and for all. I do not have in mind specifically my country but Europe and the Western world as a whole.

After the fall of communism, my optimism was based on a strong belief in the power of principles of free society, of free markets, of the ideas of freedom, as well as on a belief in our ability to promote and safegard these ideas. Today, coming slowly to the end of the second decade of the 21st century, my feeling is different. Did we have wrong expectations? Were we naive? I don´t think so.

1. We knew that socialism, or socialdemocratism, or “soziale Marktwirtschaft“ is here, is here to stay and – due to its internal dynamics – would expand;

2. we were always afraid of the green ideology, in which we saw a  dangerous alternative to the traditional socialist doctrine;

3. we were aware of the built-in leftism of intellectuals. We followed with great concern the “excessive production of under-educated intellectuals” that emerged in the West as a result of the expansion of university education for all;

4. communism had been based on an apotheosis of science and on a firmly rooted hope that science would solve all existing human and social problems. To our great regret, the West believed in the same fallacy.

I can assure you that we were aware of all that in the moment of the fall of communism. We – perhaps – underestimated some other crucial issues:

- we probably did not fully appreciate the far-reaching implications of the 1960s, the fact that this “romantic” era was a period of the radical and destructive denial of the authority, of traditional values and social institutions;

- we underestimated that the growing apothesis of human rights was in fact a revolutionary denial of civic rights and of many liberties and behavioral patterns connected with them. Human rights do not need any citizenship. That is why human-rightism calls for the destruction of the sovereignty of individual countries, particularly in today’s Europe;

- we didn´t see all the side-effects of the European integration process and didn´t fully recognize the very special role played by a construct called the European Union.  Nevertheless, our learning process was very fast. I am frustrated that even now not many people in Western Europe see it. Most of them see only what the EU propaganda wants them to see. They seemingly believe that the EU is

- a peace-guaranteeing community of nations;

- a democratically run grouping of countries, where the demos feels like a demos;

- a coherent entity monoculturally based on European values and behavioural patterns;

- an entity which centralizes only a small part of decision-making (only the issues that cannot be – because of existing externalities – solved efficiently at the level of individual countries);

- a conglomerate of countries where all are equal (in the Orwellian sense);

- a family-like institution where the weaker members are significantly helped by the stronger ones;

- an institution where the opposition to official views is welcome, allowed and made possible;

- an institution where there is a genuine, democratically formed and implemented policy, etc., etc.

Nothing can be farther from the truth than this propagandistic scheme. The current European Union is something else:

- it is an entity with only a weak common identity. For many of us, being a European basically means a geographical delimitation. As regards our identity, we are primarily Czechs, Italians, or Swedes. And we are proud of it. There are some “European” commonalities, but Europe has never been a melting pot;

- it is an entity which misuses the term subsidiarity for disguising the actual state of affairs and the predominant tendency – the ever-growing centralization of the EU decision-making;

- it is – especially after the Lisbon Treaty – an entity with one dominant country, Germany, which – as was recently stated by the its “Staatsminister für Europa” Michael Roth – must fulfil its leading role in Europe whether it likes it or not;

- it is an entity without authentic, genuine solidarity;

- it is an entity constrained and weakened by a non-functioning monetary union and by the irresponsible Schengen arrangements, etc.

we can go on for a long time discussing both the erroneous model and the undemocratic reality of the European integration process. I believe most of you look at it in a similar way. I know that you not only look at it. Your political activity in Brussels tries to do something with it. We need a next step, however. We should start building bridges – without prejudices and with open hearts and arms.

We should try to establish a viable and functioning alternative to the – European political establishment supporting – parties and institutions. This alternative should bring together all those, who believe in Europe of independent and sovereign countries, who believe in freedom and classical European liberal democracy, who believe in the possibility of the return of political accountability as close to citizens as possible. This is a task for the very near future. We should start doing something about it now. Today´s event should become an impulse to it.