Derk Jan Eppink: A religion without a God 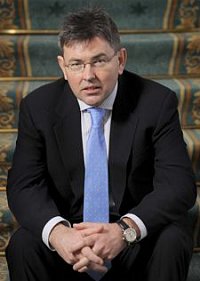 Last weekend on May 21, American Christian preacher Harold Camping, once again encountered his 'Disappointment Day'. For years he announced the end of times, predicting May 21 to be Judgment Day. On that day, the world would be destroyed and only 'a chosen few' would make it to heaven.

On Judgment Day, the preacher took a seat in front of his television to await news events. He expected a live report of CNN covering a wave of earthquakes that ultimately would lead to global demise.

Instead, CNN focused on the Frenchman Dominique Strauss-Kahn who lost his way and senses in a New York hotel room. For 'DSK' indeed, the world collapsed. The preacher was disappointed that apocalypses remained confined to only one person and possibly some of his friends in Paris belonging to la gauche caviar. The preacher fled to a motel to escape international media.

Generally, the advantage of religion is that you do not have to take 'facts' into account. Like doomsday announcer Camping, you simply believe and preach, hoping that facts will follow. Western political elites live in a secularized world, a world without God. But religion - a matter of belief - does apparently remain a need of human mankind. In particular, progressive political elites have abolished God, while clinging to notoriously religious features like 'fear', 'guilt', 'final judgement', 'redemption', 'sin' and 'salvation', as part of their political philosophies.

God is gone, but the rest stayed on. Climate Change is just an example of this phenomenon. The concept can only be effective if there is 'guilt' (politically incorrect behaviour of human mankind), 'fear' (doomsday), if there is 'sin' (acts of unprincipled unbelievers), and finally salvation (brought about by the NGO´s of the Green Movement). And if there is somehow a substitute Jesus on top, as impersonated by Al Gore, secular religion gets rooted in political communities trying to turn it into public policy all people have to adhere to.

It takes courage to withstand religion-based political philosophies. You will be depicted as a heretic, as anti-human, as narrow-minded, as autistic and stupid. In fact, like in theocracies any opponent should be dispatched to the dustbin of history. When climate change was minted into religion and subsequently put on the political agenda, carefully orchestrated by celebrities and media consultants, it became a wave of self-righteousness. There was no way to escape.

Yet a few risk-daring politicians rose to the occasion. The first was Vaclav Klaus, President of the Czech Republic and a dissident by inclination. He simply raised factual questions secularized religions can hardly cope with.

That is what he did with Communism which was, after all, an elaborated quasi-religious philosophy pretending to lead human mankind to the 'Promised Land' on Earth. And here again, even as President of an EU member state he challenged the fundamentals of a policy pretending to save the world from Doomsday.

Klaus takes on nonsensical thinking regardless of the status of the author himself. In 2009, he visited the European Parliament to tell his audience that they were 'disconnected' from reality. He stated that a Parliament without a legitimate opposition is not really a Parliament. In fact, it is a church singing the gospel of the 'ever closer Union'. Some members were shocked, left the Plenary and started crying in the corridor. Yesterday, Ivo Belet one of those weeping members, published an opinion article in a Flemish newspaper denouncing NVA-figurehead Bart De Wever for meeting the Anti-Christ from the Czech Republic. Belet, a slavish poodle of EU figureheads, is barking up the wrong tree. The European elite demand flattery and praise; not to criticism, let alone unconventional thinking.

It takes courage to challenge fashionable thinking. For 5 years, I worked in the cabinet of former Commissioner Frits Bolkestein. The Dutch Commissioner was a non federalist and a climate change sceptic in the Commission. For most of his colleagues he was the 'devil in disguise'. You can imagine the bumpy ride he had in Brussels; he was a 'non believer' in a church of devoted federalists.

Once he got a letter from former Belgian Commissioner, Etienne Davignon, a self-appointed viceroy of the United States of Belgium, who said that a non federalist should not be member of the European Commission. He demanded a purge to restore the purity of the Institution.

Ten years ago, Bolkestein publicly said that the Euro would derail if not underpinned by sound monetary policy and iron-clad criteria of the Stability and Growth Pact. He also stated that a common EU immigration policy based on unenforced external borders would generate a political backlash beyond belief. He was laughed at. But now, the political elite of the EU is not laughing anymore. They wasted ten years of policy-making and still, they would rather drive into a brick wall than to admit that they made mistakes.

Jean Marie Dedecker equally has the courage to stick out his neck. As a former Judo player and coach he is not risk adverse. On the contrary, he likes the fray and smashing his opponents on the ground, sooner the better.

And that is precisely why he has written the introduction to the Dutch version of the book President Klaus is launching here today. He belonged to the first in Belgium to challenge the preachers of doom and climate change. Belgium only recently abolished God, and for those who were still in doubt some catholic leaders and priests did the rest.

Flanders was in urgent need for a religious substitute that would be able to micromanage the lives of the people. Obviously, Dedecker was vilified by the political elites and the media which had turned into an extension of the green movement and its preachers in politics.

Both Klaus and Dedecker focused on facts, rather than on speculation and emotional manipulation. They challenged the issues head-on by raising difficult questions, and by doing so they gradually saw the narrative of climate change unravel. Later on, a series of scandals revealed that so-called scientific researchers had manipulated their work in order to serve the dogmas of their beliefs. The Copenhagen Summit resulted in failure and, demonstrations against climate change even had to be cancelled because it was to cold and frosty in the Danish capital.

Now, climate change does not have that mythical spot on the political agenda it had a few years ago. However, it remains on the agenda of political elites in the EU. Some people really do believe; others simply pretend in order to sustain a quasi-progressive image. But the man in the street never embraced climate change and why? The climate has been changing as long as there is a climate, even in times in which people were running around naked and living in caves. One slight change in the activity of the Sun has an impact on the entire galaxy. Human behaviour is just one of the many elements. Therefore, the religious zeal did not stick because 'human guilt' could not be established. And 'guilt' is what it takes to make a religion work, even a religion without a God.

Therefore, a democracy needs people like Klaus and Dedecker, people who speak out when nobody does, people who stand out when others follow the flow and people who lash out when many bend towards submission. This book will certainly be a much welcome recipe against political overheating in Flanders and the reality-check which is the necessary basis for any sound public policy.

Derk Jan Eppink, the speech on the occasion of launching Blauwe Planeet, t’Stadleest bookshop, Antwerp, May 25, 2011