Hlavní strana » English Pages » The Threats Coming from the…

The Threats Coming from the Global Warming Doctrine: Remarks to the Presentation of the Book “Planeta Azul (No Verde)” in Argentina 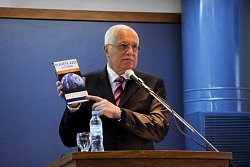 It’s a great pleasure to be in Argentina again, after long seventeen years, and to get the opportunity to visit your university, to address this distinguished audience and to share some of my views with you. I am sure there are topics which are of interest to both our countries. Thank you for the invitation.

My first impression – after only a few hours here – is that Argentina has made a visible step forward in the last two decades in spite of the collapse of its currency board system and the subsequent crisis ten years ago. I can afford the luxury of saying that I – as an economist – considered this arrangement to be a very dangerous, risky and costly experiment already during my visit here in 1994 and I said it publicly even then. It is hopefully a history for you now, but – to my great regret – it is to some degree repeated in Europe these days. I will, however, not develop this point here today.

For me, visiting Argentina means visiting a friendly country, visiting a country which has achieved a lot in overcoming various kinds of barriers to its so much needed economic and social development. We, in the Czech Republic, follow your efforts and your successes with great interest. Your country, as any other, needs favorable conditions for further development – peace, domestic political and social stability, as well as the removal of all kinds of barriers that hinder economic progress. This is what brings me to the topic of my book “Planeta Azul (No Verde)” which is devoted to the discussion and criticism of one important barrier to development, of the doctrine of environmentalism, and especially of its currently most influential version, the global warming doctrine (GWD).

One thing must be made explicit. My experience tells me that whenever I use the term environmentalism people tend to confuse two different things – a necessary protection of the environment (necessary because there is no doubt that we have to take care of our rivers, lakes, seas, forests and air) and an irrational attempt to protect – which means to control – the climate. I am very much in favor of rational efforts when it comes to environmental protection, but I resolutely reject any attempts to change or – as I frequently hear – to combat the climate. 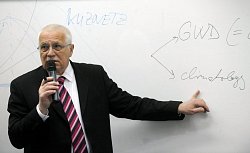 Another confusion arises from the unjustified claims that environmentalism – and global warming doctrine – is a science. It is not. It is an ideology. It is a set of beliefs and aprioristic statements. What we are confronted with these days – in the media and in the political discourse – is not an objective, scientific survey of the results of climatology about global climate or global temperature.1) The implementation of its propositions would block economic growth, human progress and the overall prosperity of mankind. It will stabilize neither the climate, nor the global temperature.

In May 2011, it will be four years since the publication of the original Czech version of my book.2) In these years, it was translated into 17 languages including Spanish. Having carefully followed the developments in the political arena, in the media and in the scientific community in these four years, I am more and more convinced that the topic, the content and the message of the book are as important and as relevant as when it was published for the first time.

It may be useful to recapitulate how the GWD came into being. In a normal case, everything starts with an empirical observation, with the discovery of evident trends or tendencies. Then comes the moment when competing scientific hypotheses that try to explain them are formulated and tested. When they receive enough support, they raise the attention of politicians. The whole process eventually leads to the initiation of policy measures. That is the usual case.

None of this happened with the GWD which started quite differently. The people who had never believed in human freedom, in impersonal forces of the market and in other voluntary forms of human interaction and who had always wanted to control, regulate and mastermind us have been for a long time searching for a simple and sufficiently threatening catastrophe that could justify the implementation of these ambitions of theirs. After having tried various alternative ideas – population bomb, rapid exhaustion of natural resources, global cooling, acid rains, ozone holes – all of which very rapidly proved to be non-existent, they came up with the idea of dangerous, man-made global warming. This concept was formulated despite the absence of reliable data evidence, of scientifically proven theories and of their comprehensive testing.

Politicians bought into this doctrine at the Rio Earth Summit in 1992, fell in love with it and – without waiting for its scientific underpinning – started preparing and implementing economically damaging and freedom endangering measures. They accepted the idea that participating in the global warming game is easy, politically correct and politically profitable (especially when it is obvious that they themselves will not carry the costs of the measures they are advocating and implementing and will not be responsible for their consequences).

There are plenty of arguments indicating that the real threat is not global warming itself. The real threat comes when politicians start playing with the climate and with all of us. My position is summarized in the question I raised in the subtitle of my book “¿Qué está en peligro, el clima o la libertad?” My answer to this question is simple: “Es nuestra libertad que está en peligro y tambien nuestra prosperidad.”

Environmentalism and global warming alarmism ask for restrictions on carbon dioxide emissions, which would – without a revolution in energy efficiency – substantially increase the costs of energy. This would be devastating because cheap energy is the source of much of our prosperity.

The GWD asks for an almost unprecedented expansion of government intrusion into our lives and of government control over us. They tell us how to live, what to do, how to behave, what to consume, what to eat, how to travel, how to spend our holidays and many other things. Some of us had experienced something similar in the communist era and feel obliged to warn against experiments of that kind in the future.

All the necessary arguments relevant for today’s debate are well-known and it is difficult to add anything fundamentally new to them. What remains is to keep stressing basic facts that are intentionally overlooked by the politicians and the media. Let me repeat some of them.

First, the increase in global temperature, which has been going on in the last three centuries, has been very small, certainly not dangerous. There are many convincing arguments that its future development will follow the same pace.

Second, there has been no statistically significant net global warming in the last twelve-thirteen years. The same decrease in temperature happened in the years 1880–1910 and 1940–1978. This is not a proof of the impossibility of another change of temperature in the future but it is a relevant piece of information, totally ignored by the politicians and the media. It shows that there is no correlation between temperature and the increasing atmospheric carbon dioxide.

Third, the scientific dispute about the causes of the recent climate change is not over, it continues.  There is no scientific consensus in this field. What is more and more evident is that the CO2 is not the main culprit. There are other potential factors. Carbon dioxide constitutes less than 4 % of the total of greenhouse gases in the atmosphere (whereas water vapour more than 90 %). Of that 4 %, mankind contributes a little more than 3 %. Three per cent of 4 per cent is 0.12 %.

Fourth, the idea of a static, unchanging climate is foreign to the history of the Earth. The climate has always been changing and the attempts to fix it just now are entirely irrational. The people have proved to be able to adapt to warmer or cooler temperatures. Better technologies and higher wealth will help them. There is no reason to expect that the people will lose this adaptability just now.

I am convinced that the impact of the small climate changes we experience upon human beings and all kinds of their activities is – because of their size – practically negligible. Should we drastically limit CO2 emissions today by 20, 30, 50, or 80 % and, thereby, radically change our way of life for the sake of a small effect on global climate when the future generations will be far better off than we are today? My answer is NO.

Politicians, their bureaucrats as well as many well-meaning individuals in academia, who accept the GWD and with it the alarmist view of anthropogenic climate changes, probably hope that – by doing so – they are displaying intelligence, virtue and altruism. Some of them even believe they are saving the Earth. We should tell them that they are merely passive players in the hands of lobbyists, of producers of green technologies, of agrobusiness firms producing ethanol, of trading firms dealing in carbon emission permits, etc., who hope to make billions at our costs. There is no altruism there. It is a cold-hearted calculation.

I would like to conclude by repeating my question: “¿Qué está en peligro?” My answer is: “Es nuestra libertad y nuestra prosperidad. El clima está bien.” This is relevant for all countries but for the less developed ones even more so. They must have a chance to grow, to develop, to move ahead without artificially induced constraints – the totally useless fight against the current CO2 levels being one of the most dangerous of them. We have to resist such ambitions in the name of freedom, prosperity and progress.

1) I find the objective and scientific survey of it in Plimer, Ian: Heaven and Earth: Global Warming, The Missing Science. Australia, Connor Court Publishing, 2009.