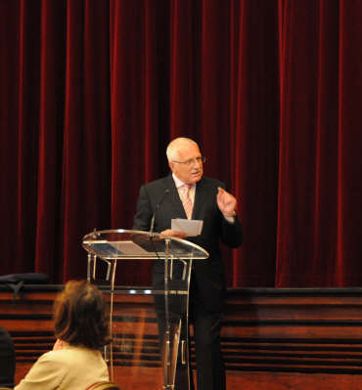 It is a great pleasure to be here, in this beautiful city, in this well-known club, and to have the opportunity to present the French version of my politically very incorrect book “Planète bleue en péril vert” to you and to all potential French readers of it.

I am really delighted that after its Czech, English, German, Dutch, Russian, Polish, Spanish, Bulgarian and Italian editions this book of mine has now also its French version. I would like to thank all those who helped to make this possible, most of all Professor Jacques Garello and his colleagues at IREF (Institut de Recherches Economiques et Fiscales).

The original Czech version of the book was published two years ago, in May 2007. Having carefully followed what has been happening in these two years in the political arena, in the media, as well as in the scientific (or pseudoscientific) community, I am more and more convinced that the topic, the content and the message of the book do not need to be rewritten. The dangers connected with the acceptance of global warming alarmism are much more important and more real than the panic connected with the current financial and economic crisis or with the similarly irrational Mexico swine flu (grippe porcine) panic we have been witnessing these days. The real threat is not global warming itself. The real threat is playing with the climate. I tried to express this view of mine in a question I put in the subtitle of my book “Qu’est-ce qui est en danger: le climat ou la liberté?” My answer to this question is clear and straightforward: “C’est la liberté qui est en danger. Le climat va bien.”

At the very beginning, I want to dispel one frequent misunderstanding. People tend to confuse two conceptually different things – a necessary protection of the environment and an irrational attempt to protect or even to fight the climate. I am very much in favor of rational efforts when it comes to the environmental protection because we have to take care of our rivers, lakes, seas, forests and air, but I resolutely reject any attempts to change – or as I frequently hear – to combat the climate.

After having spent years studying environmentalism, and its extreme global warming alarmism variant, I came to the conclusion that we have been constantly deceived. The Great Global Warming Debate is not a debate about temperature or CO2 levels. It is also not part of a scientific dispute inside climatology. It is an ideological clash between those who want to change us (rather than the climate) and those who believe in freedom, markets, human ingenuity, and technical progress. It is a dispute about us, about people, about human society, about our values, about our habits, about our way of life. Temperature fluctuations are only an instrument, not a real object of interest for those who play that game.

In my book, I tried to demonstrate the swindle and the emptiness of the environmentalists’ dogma which is now shared by the great majority of governments and by many citizens of our countries. Its main postulates can be summarized in the following way:

- the world has been getting warmer;

- the people are to blame for that;

- we are approaching a major catastrophe which will have huge negative impactpon all of us;

-the usual  degree  of  flexibility  and   adaptability  of  human beings to changing circumstances, up to now proven and found sufficient, will not help;

- aggressive   mitigation, which   means  attempts   to    change climate, temperature and CO2 emissions, however costly they may be, must be done and must be done immediately. [1]

We should say very loudly that these views are wrong and untenable. I have not been convinced by Al Gore, Nicolas Stern, IPCC and all the others who argue that we witness a unique, unprecedented, global, large and man-made global warming. It is not difficult to face up to all these adjectives. The available evidence tells us quite convincingly that:

1. The warming we witness is not global. It materializes in the cold, but not in tropical regions, in dry, not wet areas, in the winter, not in the summer, and during the nights, not during the days.

2. The warming is not large. The average global temperature increase in the last century was only 0.74 °C. In addition to it, the climate stopped warming more than a decade ago altogether. The temperature now is similar to the temperature in the year 1940, regardless of a huge increase of CO2 emissions.

3. The warming is not unique and unprecedented. The temperature in the Medieval Warm Period and in many other moments of history used to be higher than it is now.

4. The mild warming we experience is not exclusively man-made or CO2-made. There are many other factors influencing the temperature and climate and the whole very complex and insufficiently understood climate system is still full of major uncertainties. One author recently calculated that the term “uncertain” or “uncertainties” appear more than 1300 times in the text of the 2007 IPCC Assessment Report.

In spite of that we see that many political leaders, many governments and many ordinary people as well are accepting the global warming doctrine – at least since the 1992 UN Convention on Climate Change in Rio de Janeiro. The question is why. My answer to that is simple. There exists a strong, committed and motivated minority which by promoting these ideas promotes its own interests and the unorganized, uninvolved, inattentive and uncommitted majority of people who are immensely, day by day, manipulated by the protagonists of these alarmistic ideas. The children are mystified in schools, the adults on their TVs. That is the reason why I am convinced it is necessary to raise one’s voice and challenge this aggressive propaganda that is based on the cleverly organized advisory process and on a specific role played by the Intergovernmental Panel on Climate Change which succeeded in creating the impression that it represents “prevailing scientific opinion” (see Henderson, 2009, p. 62 – 64).

At a similar presentation, several months ago in Warsaw, an elderly man expressed his basic agreement with my views about the scientific and economic aspects of the issue but asked me where I see the threat to freedom because he doesn’t see it. I tried to tell him that global warming alarmism asks for an almost unprecedented expansion of government intrusion, of government intervention into our lives and of government control over them. We are pushed into accepting rules about how to live, what to do, how to behave, what to consume, what to eat, how to travel. I don’t want to make comparisons with recent well-known examples of similar excesses of social engineering experienced in the 20th century. We may go deeper into the history and closer to France. In a couple of days we will be remembering 500 years since the birth of Jean Calvin. The regime he established was nasty enough. I am afraid that environmentalism goes in the same direction. I would not be surprised to see green police in our cities soon.

On this occasion it should be stressed that my book is not about climatology. It belongs to the field called the economics of global warming, because it uses dominantly economic, not climatologic concepts and theories. The most important argumentation in this field is the comparison of costs and benefits of environmentalists´ policies and, more generally, the way how to look at the future and how to approach the intergenerational solidarity (or discrimination) dilemma the people face. Especially when they deal with long time intervals. The economists convincingly argue that this topic requires a standard application of the economic concept of discounting. We have to look at the intergenerational exchanges rationally – not with ethical or moralistic apriorisms – and take into account the opportunity costs of fighting the climate. These costs are nonzero and the discount rate, used in climatologist models, shouldn’t be zero either. In this respect the infamous Stern Report is fundamentally wrong.

This field of study also pays attention to the potential costs of global warming. Based on results of model simulations done by IPCC (or Nicolas Stern), the costs of global warming in the 21st century – when not blocked or mitigated – will approach 2,9% of the world’s GDP in the year 2100. The same models, however, suggest that the people in the industrialized countries will be 8 times wealthier than now (in the developing countries 60 times). Is the loss of 2,9% of the much higher GDP a real tragedy that should be bothering us now? Definitely not.

I don’t think that any radical, human freedom and prosperity endangering measures and policies owing to global warming are necessary. Human adaptation, human flexibility, technical progress and the markets themselves will be sufficient to deal with all future potential problems.

Speaking about other problems brings me to another highly relevant topic. It is connected with the consequences of the current financial and economic crisis. I deliberately speak about the consequences of the crisis, not about the crisis itself. Its short-term and medium-term costs will be heavy but the crisis will – sooner or later – be over. The long-term damage of the crisis will be – as it happened in the 1930s – much heavier. The adversaries of the market have again managed to spread a far-reaching distrust in the existing economic system, but this time it is not the mistrust in the free market capitalism, in the laissez-faire system, in the capitalism of Adam Smith, Friedrich von Hayek and Milton Friedman, as it was the case 70 – 80 years ago. Now it is the mistrust in the highly regulated capitalism of the last decades. I am not sure whether capitalism can survive such a massive attack. The market either is, or is not.  There are no third ways, even though many past, current and, undoubtedly, future politicians believed, believe and will believe in them.

We should consider it our duty to fight the newly rediscovered belief in the state and to speak out against the “second-generation” Keynesianism we see around us these days. We must not allow the repetition of the 1930s and the decades that followed. We must restrain, not expand government interventions into the market.

The current crisis should be accepted as a consequence and hence as an unpleasant but “just” and fair price we have to pay for the long-term playing with the market by the politicians (and their regulators). Their attempts to blame the market, rather than themselves, should be resolutely rejected. Their activities, aiming at “reforming”, which means re-regulating the economic system world-wide, are all very doubtful. I am getting more afraid of the reforms bringing in more rules and increased international regulation than of the crisis itself.

The current crisis has not been caused by capitalism and definitely not by too much capitalism. On the contrary, it was caused by the lack of capitalism, by suppressing its normal functioning, by introduction of policies that are not compatible with capitalism, of policies that undermine it. In a standard economic terminology, we witness a government failure not a market failure, as some politicians and their fellow-travellers keep telling us.

In the 1930´s the democrats and the liberals (in the European sense) failed both intellectually and politically to avert the growing mistrust in the market. What is at stake today is not to end up even worse. We have to face two groups of people who mistrust the market now – traditional socialists and naive (or not so much naive) environmentalists. I don’t know which of these groups is more dangerous. Perhaps the second one. The socialists have their opponents in classical liberals, but the environmentalists do not have any explicit and well-defined opposition. That bothers me. That was the reason for writing this book.

[1] For a very similar summary of what he calls „a body of received opinion“ see David Henderson, Economists and Climate Science: A Critique, World Economics, Vol. 10, No. 1, January – March 2009.